The Yerbanian Chancellor is the unnamed tyrannical leader of Yerba in the episode Locked Up!.

Sgrodis describes the position as being similar to the United States President, but his presiding over the case of Tori Vega means that he is also the leader of the Judicial Branch of the Yerbanian federal government. Its even implied he's actually the dictator.

He is mostly seen sitting on a chair or at his desk with his military aids surrounding him. He also has one eye patch on his right eye because it stopped working when a vampire moth bit him, just as one did to André. He arrived to see Tori, André, Cat, Jade, and Trina perform their new song All I Want Is Everything. It all went well until Tori's shoe accidentally flung off her foot and hit his other eye. Even though Tori tries to tell him that it was just an accident, he refuses to think so and convicts her upon his lead military aid intimidating the lawyer he provided for her and ruling her guilty of all charges. His lead military aid sentences Tori to four years in prison on the Chancellor's behalf. Because both eyes are covered by two eyepatches upon the doctor's son being unable to see if anything can be done for his left eye, he can no longer properly aim when he does even the simplest of activities, such as put ketchup on fries or talk to the right person. Both times, he has to be corrected by his military aids

When her friends and Erwin Sikowitz tries to beg him to let Tori go, he eventually agrees under the condition that they never return to Yerba. This was until Robbie accidentally kills his octopus (which was a gift to him from the Prince of Gustavia), which leads him to break down after being told what happened by his lead military aid.

Tori later got the prison guards to grant her an audience with the Yerbanian chancellor as part of Mr. Sikowitz's jailbreak part. While "admitting" that he "attacked him on purpose." Tori suggests that she and the prisoners put on a show for him, his family, and anyone else he can invite to "show" how sorry she and her friends are for the suffering they caused him. The Yerbanian Chancellor agrees with the terms and attends the performance. After the song, a guard discovered that Tori and her friends have escaped causing the Yerbanian Chancellor to scatter the guards to find them as one of his military aids guides him through the crowd.

The Chancellor also became very fond of Cat, according to TheSlap. He joined SplashFace so that he could friend her and he put a picture of himself and Cat on all the Yerbanian money. 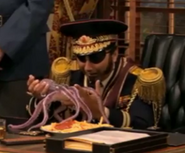 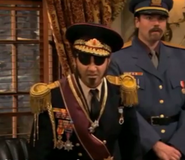