This page is about the episode. You may be looking for the location of the same name.

Wanko's Warehouse (also known as The Warehouse[3]) is the 1st episode of Season 4 of Victorious and the 48th episode overall. It first aired on September 22, 2012 in the United States. This is the Season 4 premiere of Victorious.

Trina secretly tells Tori about a huge sale at Wanko's Warehouse. Although initially reluctant to tell Cat, Jade, André, and Beck, afraid that word will get out, causing the lines at Wanko's to be long, Trina eventually texts the group about the sale but Cat says the text out loud as the gang shushes Cat, and they all set out to go. After getting there and seeing the long line, they find out from Sinjin and Burf that the big sale is going to be at 7 AM, not 7 PM, so they have to wait a while. Jade comes up with the idea for them to sneak into Wanko's while they're still open at night and stay overnight to be the first ones there for the big sale the next morning. They decide to hide in bins until the store closes, but just as they decide to come out of the bins and walk around the store to pick out items in advance, they find that the store has security cameras and alarm lasers on at night, which if they crossed, would set off an alarm and notify the police. The gang figures out the height of the lasers to send someone to slide under the lasers to shut them off at the security panel at the front of the store so that the rest of the gang can get through. They decide to have Robbie go because he's skinny and flat enough for it. While Robbie finds his way out to the panel, he runs into twin burglars who plan to rob the store. The others begin to get antsy to leave, with Jade hungry, Trina needing to wazz, and André freaking out. As Jade asks for a sandwich, Cat crosses the lasers to get Jade a sandwich, setting off the alarm. They decide to cover their heads with bins as they escape, grabbing Robbie on their way out, so that they can leave the store without being caught by the cameras on their way to the parking lot.

While Robbie tries to find a way to turn off the security lasers at the front of the warehouse, twin brothers named Barney and Billy Triplet enter, planning on robbing the store. They initially think Robbie is a storekeeper who would have access to the safe for them to steal money, but Robbie refuses. Robbie hangs out with them after they seemingly accept him and compliment him on his walkie talkie, as opposed to making fun of him for the walkie-talkies the way his friends did. In doing so, he ignores André and Jade repeatedly calling for him on the walkie-talkie. After Cat sets off the alarm and the gang runs past with bins on their heads, the robbers try to keep Robbie hostage as he attempts to run with his friends, but Beck and André push them off him, and the gang escapes.

Store Clerk (on PA): Attention Wanko's shoppers, you are shopping at Wanko's.

Jade: Just before Wanko's closes at 9, we hide here. In-store. Then after they close, we have the whole place to ourselves. We can walk around, pick out what we wanna buy, have some fun.

Tori: And then, we're the first ones here tomorrow morning when the sale starts!

Tori: He likes it when you say "Base to Shapiro".

Jade: Oh, I care what he likes! Why won't he answer us?

André: Aw, ya turned it off! You've been talking into an offie talkie!

André: Man, I don't get it. What are these laser beams for?

Robbie: They're part of the security system, if we break one of those beams, it will set off an alarm...

Beck: And then, we have cops.

Jade: So, you guys up for an all-nighter at Wanko's?

Robbie: (Under the bucket with Tori) I like where this is going!
Tori: I do not!

Beck: Man, I really don't want to wait in a long line.

André: Me neither. I don't like it one bit!

Cat: I love lines! They're like long, single-file parties!


Cat: We're not doing anything.


Jade: I need bins, so this is perfect.

Cat: (Goes to lick the laser, but is pulled back)

Trina: Stop! What are you doing?!

Cat: I wanted to lick the laser beam with my tongue.

Tori: (defeatedly) You wanna know what flavor it is, don't you?

Tori: At that movie you wazzed in a popcorn bucket.

Trina: A bucket is not a bin!

Sinjin: (to Burf) That's a peculiar way to eat a cucumber.

Sinjin: You're so weird. (Licks the back of his hand and grooms himself like a cat.)

Jade: Someone, just get me a sandwich!

André: Man, the cops will be here in five minutes!

Tori: We've got to make a run for the car.

Beck: They have security cameras outside!

Trina: If they get us on camera, they'll find us and arrest us!

Beck: What are we doing?

Tori: Measuring to see how high this beam is from the floor.

Beck: Will you let her measure it, please... Well?

Triplet Brother: You shouldn't be ashamed about being excited about your walkie talkie.

Robbie: Yeah... you're right! I was born this way!

Jade: Follow me into Wanko's boys and girls... and Robbie.

Jade: What is this, a meeting?

Cat: That's what my brother calls it when he and his friends hang out together and eat meat.

Tori: So, can we cut the line and hang here with you guys?

Sinjin: Sure. Get the gang and we'll let you cut in the line.

Sinjin: The sale starts in the morning. 7 am.

Tori: 7 am? You're saying that this sale doesn't start for 12 more hours?

Sinjin: That's right. Looks like we have a long night of snuggling ahead of us.

Beck: How much time 'til the store opens?

Robbie: Shapiro to base.
Tori: Robbie would you just use your first name and stop calling me base?
Robbie: No! Base...
Robbie: I'm just outside the security area. I see the alarm panel, and a partially eaten fat cake on the desk.
André: Awh!

Robbie: Hey, you guys! Look what I found in aisle 15! Walkie Talkies. And they have a range of 600 yards, so if I have one, and you have one, we can be 600 yards from each and we can still talkie while we walkie!
Tori: You have a cell phone.
Robbie: So?
Tori: It lets you walkie and talkie with people all over the world.
André: And text.
Beck: Which you can't do with a walkie talkie.
Robbie: Well now I feel bad...

Click here to see the photo gallery for Wanko's Warehouse. 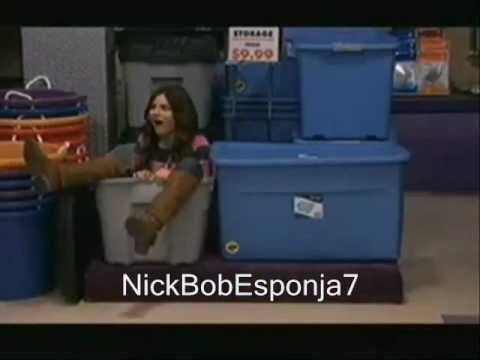