Victorious Wiki
Register
Don't have an account?
Sign In
Advertisement
in: Episodes, Season 3 episodes, Episodes about Tori,
and 4 more

Tori Goes Platinum is a one-hour Victorious special. It is the 10th and 11th episode of Season 3 and the 44th and 45th overall. It aired on May 19, 2012. Tori Goes Platinum drew 3.8 million total viewers and was number one in its time period across key demos – K2-11 (5.1/1.8 million), K6-11 (7/1.5 million), Tweens (7.3/1.5 million). The program bested direct competition by triple digits among kid and total viewers, and totaled 8.3 million total viewers over the weekend. This is the third and final hour-long special of Victorious.

Tori wins a contest to sing the opening number at the Platinum Music Awards, but she soon finds out the show's producer, Mason Thornesmith, and his team want to reinvent her look and personality. Tori has to completely change her style and act like a rebellious diva. She is not allowed to tell anyone about this, not even her friends and family. Her friends at school suspect she is changing because of her sudden chance at fame, and it becomes a problem for Tori. Eventually, Beck comes over to Tori's house and guesses her secret: he knows that Tori wouldn't change so much unless someone was making her. Beck tells Tori to be herself and promises that she won't get fired because the show is only two days away. They almost kiss before being interrupted by Mrs. Vega coming into the room. Tori ends up taking Beck's advice and telling Mason and the producers that she can't take it anymore, which leads Mason to fire her. He gives Jade the chance to open the Platinum Music Awards instead, since he also liked her audition. Jade agrees to do the show even though Tori is devastated.

André, Robbie, and Beck all go to Tori's house, attempting to cheer her up with gifts such as a creepily laughing dog and a chocolate leaf blower. Cat PearChats them on her laptop from Jade's rehearsal, and André and Robbie quickly leave to join her there. However, Cat accidentally leaves PearChat on, and Jade can see Tori and Beck talking alone in Tori's living room. She watches as Beck leans in to kiss Tori, but Tori pulls away. When he asks why, she tells him that Jade is her friend, and she feels wrong about kissing a friend's ex-boyfriend. Later, Tori goes to meet Jade at the Boomerang Theatre to talk to her about her chat with Beck. Jade has a change of heart, feeling that it was wrong for her to accept the role when it was Tori's chance that she had won fairly. She decides to change the script so Tori can perform, while she goes into the audience to watch. Tori performs Make It In America, and Mason sees this. He is angry at first, since he fired Tori, but he likes the performance and a person who works for him says: "But you fired her," and Mason just responds, "You're fired." After she is done performing, they all run up to congratulate her, and her friends hug her.

Cat eats some of Mason's bibble (a fictional British food) and becomes very addicted to it. She carries around a big sack of it and won't even let anyone touch nor share it. Her parents hire a man named Oliver to keep her from eating bibble, handcuffing the two of them together. He keeps her from eating or even going near it and won't let anyone give her any. However, at the end of the episode, Oliver and Cat are seen hiding behind a dumpster eating bibble. Also, on TheSlap.com, Tori mentions that they are only un-handcuffed when Cat goes to the bathroom, and this is why Cat keeps a secret stash of bibble behind the toilet.

This episode got positive reviews and approximately 3.823 million viewers, which is the season's fourth highest amount of viewers for an episode. It was also the first hour-long special to get below 4 million viewers.

Sikowitz: Backstory. (Points at his back) Back. S.... (Points at Tori) tory. Backstory.
Tori: Why do you keep saying backstory?
Sikowitz: Excellent question! When it comes to television shows and Hollywood movies, most of the writing is... terrible.
Everyone: Yeah, that's true.
Jade: Don't we know it.

Cat: Ooohhh! The police found a weird stain on the seat of my brother's car.
André: Uh, what kind of stain?
Cat: They don't know yet. They're taking the car seat down to "the lab."

Sinjin: Hi, sorry to interrupt.
Sikowitz: What is it, boy?
Sinjin: Mason Thornesmith is having a major press conference right now about the Platinum Music Awards! (runs away happily)
Robbie: (while looking at his PearPad 2) I got it. They're streaming it on TheSlap!
Tori: Put it on the TV!
Everyone: Come on! Put it on!
Sikowitz: Okay! Lets see…(typing into his PearBook) W…w…w…
Cat: (pushes Sikowitz) Move!

Trina: I'm even changing my name.
Tori: To what?
Trina: P-Zazz!
Tori: Wait, isn't that a medicine that helps people stop wetting the bed?
Robbie: No, that's Pee-Zol, and it doesn't work very well…(Tori and Trina stare at him) So I hear…

Mason Thornesmith: For the next 48 hours, we will be accepting online auditions at SuperstarBAM.com.
Trina: Yes, yes, I so got this! (to other people talking) Shut up!

Tori (to Beck): I didn't eat dinner last night, or breakfast this morning, and I'm dying.

Beck: So, why are you dressed like that? Not that it's bad. Just um…why?
Tori: Uhhh…just 'cause.
Jade: Yeah, just 'cause she thinks she's a big star now.
Tori: I don't think I'm…Look, I just thought I wanted to wear something a little different today. This has nothing to do with me singing in the Platinum Music Awards.
Jade: (coughs) Liar! (coughs)

Robbie: (points at Cat) Sikowitz, Cat has bibble!
Sikowitz: Cat! (gets the bibble from Cat)
Cat: No, it's not mine, I'm holding it for a friend. But I need it! I mean my friend needs it!
André: (gives Cat gum) Cat, here.
Cat: What's this?
André: It's a special gum. If you're craving Bibble, just chew some of that it'll make you feel better. Just unwrap it, then chew-
Cat: I know how gum works!

(while Cat is chewing the bubble gum that André had given her)
André: Uh. Cat, maybe you want to back off that gum.
Cat: Don't tell me what to do!

(Paparazzi enter the classroom and start taking pictures of Tori)
Sikowitz: Hey! Hey, you people! Paparazzi people! Out! Get out!
Paparazzi: Whoa! It's the voice of Plankton!
Sikowitz: No, I am not…
(Paparazzi take pictures of Sikowitz)
Sikowitz (playing along): I mean…Karen, I must have the secret formula for the Krabby Patty!
Paparazzi: Nice, nice, let's get a shot of Plankton with Tori!
Sikowitz: Oh, sure, sure, huh, how about this? Nice, right?
(Sikowitz stands next to Tori and the paparazzi photographers take pictures of them)

Jade: So, you deny that you totally changed how you dress?
Tori: No.
Jade: Do you deny throwing a tantrum at that restaurant?
Tori: No, I did. But. But-
Jade: (Imitating Tori in a sarcastic voice) But! But! But! But!
Sikowitz: Looks like someone got the bad case of the buts.
Rex: Maybe she should see a "but" doctor.
Robbie: I've got a guy.

(Mason Thornesmith and his crew show up at Hollywood Arts, and Mason confronts Tori for not wearing the costume he sent her)
Tori (Nervously): Hey, Mason.
Mason Thornesmith (Angrily): Hey, what? Why are you dressed like a pre-turd? (To his female assistant) Did you send her the jellyfish dress—with the tentacles?
Chelsea: I did! I swear it!
Mason Thornesmith (To Tori): Where's the dress?! And why aren't you wearing the meat hat? (To Chelsea): Did you send her the meat hat?
Chelsea: Yes! I…I cross me heart!
Beck: Tori doesn't wanna wear your jellyfish dress or your meat hat.
Mason Thornesmith (To Tori): Listen to me, young lady. We have a deal.
Tori: Look, I don't wanna be your puppet anymore! I don't wanna wear stupid clothes, and stupid makeup. And I don't wanna be mean or flip tables or dump ravioli down former astronauts' pants!

(After watching the video of Tori in the restaurant)
Sikowitz: That is disappointing and shocking. It's disashocking.
Jade: And hilarious. It's disashockinglarious.
Cat: (While chewing some gum) Yeah. Tori has a big problem.

Beck: Now why don't you just stop?
Tori: Cause, if I don't keep acting like a 'bad girl obnoxious rock star', they might drop me from the show!
Beck: The show is in two days, they can't fire you.
Tori: I dunno, I'm scared.
Beck: Listen, just tell Mason Thornesmith, that you're not gonna play his little game anymore.
Tori: But...
Beck: The world needs to see who you really are…cause you're awesome.
(Lean in to kiss) 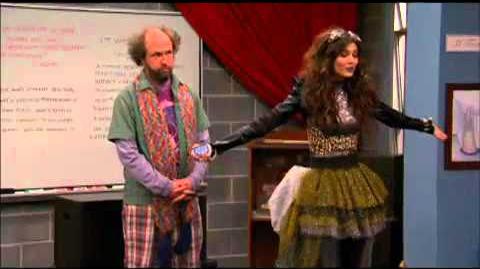 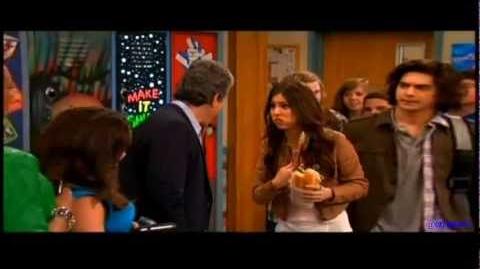 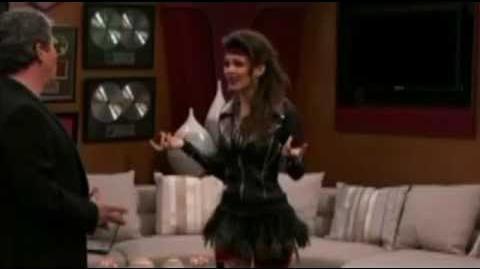 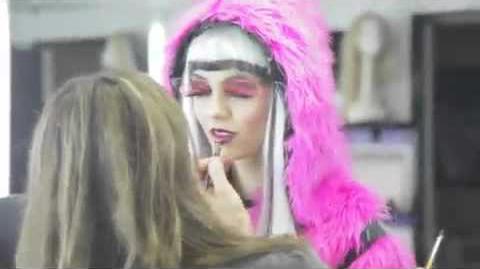 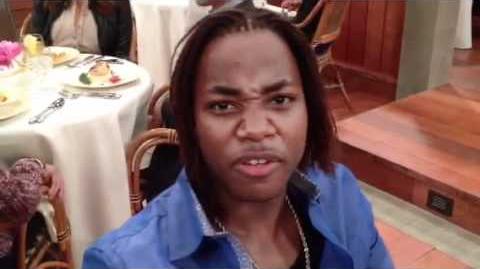