Victorious Wiki
Register
Don't have an account?
Sign In
Advertisement
in: Citations needed, Episodes, Episodes with Songs,
and 6 more

Tori Gets Stuck is the fourth episode of the second season of Victorious and the 24th episode overall. It aired on May 14, 2011 in the United States to 4.1 million viewers.

Sikowitz announces the casting for the new play called Steamboat Suzy, and Tori lands the lead, while Jade is stuck as her understudy. She is furious and becomes even angrier when Tori says she doesn't even know what an understudy is. Jade tries many attempts to get Tori to miss the play. First, she tries to steal Tori's part by hiring Sinjin into tricking Tori by calling and telling her that he works for Lady Gaga and asking Tori to dance and sing backup in a new music video. After her first plan failed, Jade attempts to get Tori sick by looking through her medical records and then gets Bush Daisies (which Tori is allergic to) delivered to Tori. Tori is able to avoid the flowers, and she tells Jade that she earned the lead, and nothing can stop her from doing it. However, during opening night, Lane (the school's guidance counselor) receives a text from Rex, saying, "There's a car parked in Robbie's butt", and they rush to the hospital to see him. At first, Tori thinks that this is another trick from Jade to get Tori to miss the play, but Jade says it’s not. The gang visits Robbie in the hospital. Robbie tells everyone that ten years ago a scary bully made him swallow a Pontiac toy car and now it's stuck in his small intestine, and if it moves, it may "tear his guts apart."

The doctor comes in, saying the gang needs to perform surgery and need a pint of blood but they do not have enough at the hospital because the type Robbie has is rare. Jade, because she read Tori's medical file, reveals to Tori that she and Robbie share the same blood type, which is O-negative. Tori tells the doctor that she wants to get the surgery done quickly because she is the lead role in the play. The doctor suggests that Tori gets an understudy to play the role she will be playing, which Jade, happily, says that she is the understudy for Tori. Tori donates blood, but Jade gets rid of the first pint to make Tori late for the play and make her unable to take the role of Suzy. She gives another pint, which Robbie accidentally drops, splashing it all over them. Meanwhile, back at school, Jade puts on Tori’s Steamboat Suzy dress because she knows that Tori will be late to take the role of Suzy. The last pint of blood was a success, but it causes Tori to feel dizzy and not able to perform her role in the play properly. Jade quickly decides to get in Tori's dress and play the part, but Sikowitz says that she has been a "gank" all week. Jade persuades him by telling Sikowitz that the show must go on. Instead of Jade playing the role, Sikowitz ends up playing the role for Tori while Tori is wearing Sikowitz's clothes (to the bewilderment of everyone, including the actors).

Sikowitz tells Trina that she needs to be a more convincing actress when she fakely coughs for her role as the girl with tuberculosis in Steamboat Suzy, so she goes to every extent to prove herself to Sikowitz. When Trina visits Robbie at the hospital, she hears a man with tuberculosis coughing. She and Cat go to his room so that Trina can record the man's coughing voice. After being too close to him, Trina catches tuberculosis for real, and Sikowitz believes Trina has improved greatly and does not believe her upon telling him this, saying that if she believed it, the audience would too.

This episode has been received negatively by fans due to Jade's behavior and actions being worse than typical, as well as for being too violent in some aspects for children. The episode premiered to 4.16 million viewers and was the most-watched scripted cable telecast of the week save for some SpongeBob repeats.

André: What about acting?


Cat: Did you get the lead?
[Jade crumples up the paper and kicks a chair]
André: I don't think she got it.

Jade: Yeah, yeah if you get sick, or go missing, or GET HIT BY A BUS!!! [runs out]
Tori: Uh…
(Jade breaks something)
Tori: She can't drive a bus…right?

Robbie: So who's playing Suzy?
Tori: (reading the paper) Me.
Jade: Yeah. Her. That. She got the lead!
Cat: What part did you get?
Jade: I got cheated and humiliated.
Sinjin: You get used to it.

Lane: I have a text from Rex. It says there's a car parked in Robbie's butt.
Cat: Oh, my God! I don't know what that means.

Robbie: Ohhhhh!
Rex: (to Robbie) So... how you feeling?
Robbie: Not good. I have a sharp pain in my lower abdomen.
Rex: (whispering) Rob. Rob. Rob, listen.
Robbie: What?
Rex: I don't care.

Doctor: Oh, my goodness, Robbie, I didn't realize you were so popular. (to Jade) Are you his girlfriend?
Jade: No, are you?

Tori: How much blood are you going to take?
Jade: Take a lot. And whatever you don't need just put it in a jug and send it to my house.
Tori: Get out!
Jade: Nooooo! I'm leaving.

Doctor: If that Pontiac moves, it could rip that kid's guts apart.
Robbie: (squealing) Ahh!

Robbie: (holding Tori's blood) It feels like I'm holding liquid you in my hands.
Tori: Okay…
Robbie: You know, if you hold it up to the light you can totally see all the- (Drops blood)
Tori: (Angrily) Get…the nurse!
Robbie: Okay!
Tori: FASTER!!!

André: You can't captain a boat. You're just a woman.

Tori (fainting): You…you may be a woman… but that doesn't mean… I'm not the best ding-dang robot captain that this… river's ever. (singing) Men will always la-la-la la-la-la-la, women always da-da-da da-dee, and so I'm not a captain, I'm a pretty…little salmon. Whoa… (Tori faints)

Tori: (dizzy) Did…did they get the Pontiac out of Robbie? (holding on to Jade and Cat)
Cat: They sure did, Tori.
Tori: Yayyy…(falls down with Cat)
Cat: Aahh!

[While Tori's at the hospital]
Jade: Oh, then I'll just keep her dress warm.

Tori: Okay why don't you go to the nursery and scare the newborn babies?

Jade: [gasps excitedly] Where are the babies?

Nurse: (on the phone) WELL WHO GAVE HIM THE MUSTARD?!

Click here to see the photo gallery for Tori Gets Stuck. 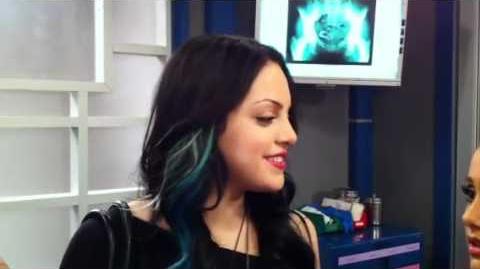 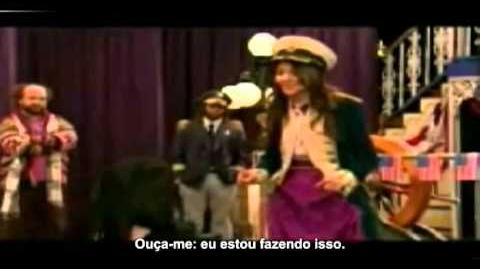 Tori Gets Stuck Promo
Note: The promo has Portuguese Subtitles.