Victorious Wiki
Register
Don't have an account?
Sign In
Advertisement
in: Citations needed, Episodes, Episodes with Songs,
and 6 more

Meredith wants to hang out with Beck, but he is hesitant because he doesn't want to make Jade jealous. Tori and André try to help by getting Jade a date to even out the playing field. No one will ask her out, so they pay a guy named Gilbert to do it. When he tries, he gets too scared, breaks down, and admits that he was paid to ask her out. Jade is furious and confronts Tori and André. When they explain they were only trying to help Beck go out with Meredith, she says he can date whoever he wants, despite almost losing her temper when she finds out Beck wants to go on a date with Meredith. When she calms down, she lets Beck enjoy Meredith's cupcakes. Beck takes Meredith to the Full Moon Jam, but as the date progresses, he gets annoyed as she agrees with everything he says. He realizes he prefers a girl who fights back and can challenge him, like Jade. After Jade sings her song, "You Don't Know Me", Beck joins her on stage, where he admits that he's missed her and they kiss, becoming a couple once again.

Robbie brings his sister's butterfly to school, and after Cat begs him to show her the butterfly by flirting with him, he finally agrees. The butterfly escapes after it is released and flies into Cat's left ear. They spend the rest of the day trying to get the butterfly out of her ear, until André's grandmother screams in Cat's ear, making the butterfly fly out of her right ear.

Tori: There's gotta be some guy who'll ask out Jade.
Sinjin: Not that I was listening behind the door, but I'm currently between girlfriends.
Tori: (awkwardly pushes the door closed)

Tori: So, your plan is to spend the rest of your life being scared of Jade?
Beck: (scoffs) That's not my only plan... Someday I'd like to plant a vegetable garden.

Jade: Okay, that sounds horrible. I can't hear myself in the monitor, turn me up a little.
Sinjin: Sure, I would love to turn you up a little. *laughs*
Jade: Just turn my voice up, you MOP-HEADED FREAK!

Tori: Come onnn...
André: No no no no no no, de no-no-no.
Tori: So you'll do it?
André: I am not going to ask out Jade on a date.
Tori: Just one little date next week?
André: No.
Tori: But...
André: Nyooooooo.
Tori: Come on, if you take Jade out on a date, it'll show other guys that Jade can be dated, and then more guys will ask her out and Beck won't feel so bad about going out with Meredith.
André: How about I ask out Meredith, and Beck just buys himself a hamster or something?
Tori: But don't you remember last year? You had a crush on Jade and you really liked her.
André: And when I was three, I really liked my dinosaur underpants. Things change.
Tori: But Jade can be so much fun.
Jade: (to props man) NOT NOW!
Tori: This is hopeless.
André: Mhm. The only way to get a guy to ask out Jade... is if you pay him.
Tori: Pay him? Like.... money?
André: I'm talking about money.
Jade: SINJIN!! Fix this monitor before I make a necklace out of your EARS!!
André: A lot of money...

Jade: (angrily) You paid a guy to ask me out?!
Tori: Run away! (runs away with André)

Gilbert: My name is Gilbert.
Jade: So?
Gilbert: Oh my God.


Gilbert: I-I really like your shoes.
Jade: I really hate these shoes. They're ugly, and they hurt my feet.
Gilbert: Well, then why do you wear them?
Jade: 'Cause I like to punish myself.
Gilbert: Well, I-I think you look really nice today.
Jade: Oh, so yesterday I looked gross?
Gilbert: No, no, no-no. I just meant tha-
Jade: That I usually look disgusting, but today I got lucky? (Get's closer to Gilbert creepily)
Gilbert: No, not at all, I just... (turns to Tori and André hiding around the corner) Oh forget it, keep your money!

Beck: I've missed you.
Jade: So what you gonna do about it? (Beck leans in and kisses Jade)

Jade: (picks up toilet paper) I ought to take this and kill you both with it!
Tori: How could you kill us with toilet paper?
Beck: Put it down! Put it. Down!

André: I got dragged into this.

Tori: See we thought...
André: You thought...
Tori: We thought.... that if you were asked out by a guy, you'd be okay if Beck asked out a girl.
Jade: Oh my god! How many times do I have to say it, I don't care who you date! We broke up, ask out any girl you want.
Tori: See I said you should have just asked out Meredith!
Jade: MEREDITH?!
(André takes all the rolls of toilet paper off the shelves)
Beck: Jade...
Jade: Oh, I knew it! I knew it two years ago when you were in that awful play with her!
André: I think I wrote that play.

Jade: You know what? I don't care. Go out with Meredith...enjoy her cupcakes.
André: How can she kill you with...? (holds up toilet paper) (Beck leaves disappointed)

Beck: Yeah, I should have told you. This is a bad place to hide from Jade.

Click here to see the photo gallery for Tori Fixes Beck and Jade. 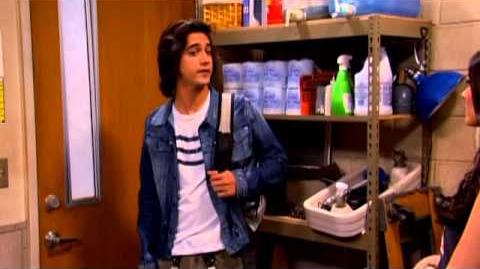 As an episode based around one of the more hotly debated ships, this episode inevitably drew a mixed reception. While the Bade shippers loved their ship getting back together, those that shipped Beck and Jade with others felt that it represented a wasted opportunity to take Beck and Jade to new places. What everyone agreed was a low point, however, was the highly abrupt, almost forced, resolution.