Three Girls and a Moose

Three Girls and a Moose is the fourth episode of Season 4 and the 51st episode overall of Victorious.

Tori, Cat, and Jade try to win the affection of Beck's handsome Canadian friend, Moose. Tori attempts to impress Moose with hockey trivia, Jade uses her and Moose's mutual favorite movie The Scissoring, while Cat tries attracting him with hamburgers. The girls' obsession leads to them neglecting their responsibility of helping the guys out with Tinkle-Aid, a fundraiser for a third floor boys' restroom in the school. Tori and Jade had committed to singing back-up for André, while Cat had agreed to be Robbie 's assistant in his magic act. While focused on their competition for Moose, none of the girls attend any of the rehearsals. When the three girls, along with Trina and Moose, drive to Karaoke Dokie, the boys confront them and inform them that they had to cut them out of the program altogether. André had found a way around needing back-up singers, and Sinjin and Burf were Robbie's new assistants. After this, Moose tells them that he should really go spend some time with Beck. They agree, and after prying Trina off his back, they let him leave.

Later, when Beck and Moose were hanging out outside of Beck's RV, Tori comes by to apologize to Beck for abandoning Tinkle-Aid and to Moose for lying about being into hockey. She then tries to get Moose to say he liked her the best. At this point, Jade makes her presence known, and she and Tori begin to fight over Moose once more, as Cat comes by with a grill of hamburgers. Beck, unable to stand it anymore, tells Moose to choose which one of the "freaks", as he called them, he liked the best. Moose explains that he only likes Canadian girls because they actually like hockey, are bigger, and aren't as weird as LA girls.

At Tinkle-Aid the following night, Tori and Cat rush in to publicly apologize to Beck, André, Robbie, and all the other LA boys by singing a duet entitled LA Boyz. The boys seem to enjoy it and praise the girls afterwards, but Beck notices Moose isn't there, and none of the others seem to know where he is. Meanwhile, Jade is supposedly driving Moose to Karaoke Dokie, but instead, drives him off into the middle of nowhere and makes out with him.

Robbie, Beck, André, and all the other boys at Hollywood Arts host an event called "Tinkle-Aid" to help Hollywood Arts raise enough money to build another boy's bathroom since there is one more girl's bathroom than there is a boys bathroom.

Moose: Can someone get this girl off my back?
Trina: NOOOOO!!!

Moose: But I'm hoping to see the house where they filmed my favorite scary movie.
Tori: Oh, what movie?
Moose: The Scissoring.
Tori: (feigning interest) Oh!
Jade: (standing between Robbie and Moose, staring at Moose intently) You're a fan of The Scissoring?
Moose: Oh yeah!
(Jade shoves Robbie of the seat; he squeals in shock and sits down in the now empty chair)
Jade: First of all, I love that movie more than I love my mother. And I happen to know exactly where that house is. I even know how to sneak into the backyard. (grabs Moose's hand)Look at that hand! You must destroy gloves.
Tori: Waiter, my friend Moose wants a hamburger right now!
Cat: He's my friend too!
Beck: I remember when he was my friend.
Pretty Waitress: You want me to take your order?
Moose: Hey.
Tori: No, we don't want you!
Jade: Go get the ugly waiter.
Tori: (To Moose) She's actually a dude!

Robbie: We always go to Nozu. I want a hamburger.
André: Yeah, I need some beef and fat.
Cat: Eww...
(Tori and Jade react with disgust)
Robbie: Come on...
Cat: We want sushi!
Robbie: We've had sushi three times this week already!
André: Come on, let's just go to Karaoke Dokie and get a burger.
Jade: We're going for sushi!
André: Alright, fine.
Robbie: Sushi at Nozu.
Beck: Hey, guys.
Tori: Oh hi! You wanna come to Nozu with us?
Beck: Oh, I can't; my friend Moose just got here from Canada.
Tori: You have a friend named Moose?
Beck: Yeah, I haven't seen him since feeferdoon.
Cat: What's feeferdoon?
Beck: Oh, in Canada, that's what we call kindergarten.
Jade: Wow, that's not interesting.

Cat: I love Canada.
Moose: Really? What do you love about it?
Cat: Ummmm... Hey, what is this? Some kind of quiz or something? (Laughs then holds Moose's hand)

Moose: (Jade had turned off the car & said the gas tank was empty) The gauge says you have a full tank.
Jade: Try not to talk.
(Jade pulls Moose to face her & the two start kissing)
Moose: Later can we get a hamburger?
Jade: We'll see.

Moose: (comes in the hall with a bouquet of roses) Hey Cat.
Cat: Oh, Moose, hi! Who are those flowers for?
Moose: You. (gives the flowers to Cat)
Cat: (gasps, and takes the bouquet) Flowers for me?
Moose: Yeah. I got your text that said, "Hi Moose, it's Cat. Please bring flowers to me at Hollywood Arts immediately."
Cat: Aw! You're such a sweetie. Come on let's show Tori and Jade the flowers you brought me. And not them.

[Tori and Cat sit down at the table with Moose, Robbie and Jade go for the last seat]
Jade: Get up!
Robbie: No, my legs are already straddling in the chair! My legs are straddling!
Jade: Ugh! [reluctantly sits down with Beck and André]

Click here to see the photo gallery for Three Girls and a Moose. 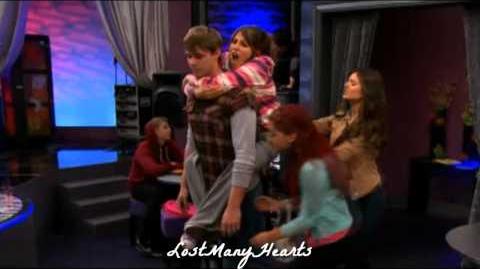