The Hambone King is the 2nd episode of Season 4 of Victorious and the 49th episode overall. This episode got 2.391 million views on the premiere night.[1] This is the lowest documented audience of an episode in the series.

Robbie posts a video online called "The Hambone King", showcasing his rhythmic talent of ham boning, gathering the attention of other students at Hollywood Arts and even others, namely Mrs. Lee and Kwakoo at Nozu during Robbie's dinner with Cat and Tori. At Nozu, Jarold Ardbeg, who is said to be the real hambone king, and his friend show up, claiming that Robbie is a fake and challenging him to a hambone-off. Robbie and Jarold have a ham boning competition behind Nozu, but Robbie loses when he hurts himself. The gang then brings him to Tori's house to try and comfort him, where they find out Tori's secret; she used to hambone seven years ago on a ham boning team with Jarold. Then, Tori agrees to help Robbie train to beat Jarold after venting about how Jarold was jealous that she was better than him and she caught Jarold ham boning with another girl. They both do a lot of training, and with the help of the others, Robbie eventually gets better at ham boning.

When Robbie hambones against Jarold a second time, at Nozu, his friend Merl throws a piece of sushi at him, causing him to lose. Tori calls them out and says they cheated and then proceeds to hambone against Jarold. Merl tries to cheat again and throws a piece of sushi at Tori, but she eats it and completes her sequence. When it is Jarold's turn, he messes up and Tori becomes the "Hambone Queen."

Cat tap dances everywhere to practice for a role in a musical. Cat tap dances so much to the point where André and Jade put slippers on her feet so it doesn't make so much noise. Cat's tap-dancing helps Robbie practice his ham boning, however, as Tori trains him.

André: Man Robbie is loving all that attention!
Beck: I know right!
André: I bet he does his signature flirt move.
Beck: Flirt move?
André: You know the gigglechin.
André: It's where he giggles and then he puts his fist up to his chin.
Beck: I don't think I've ever seen Robbie do...
Beck and André: Aw alright! Yes... well played.

Tori: (comes up) Hey, why are those kids paying attention to Robbie?
Beck: They love the video he posted on TheSlap.
Tori: What video did he post on the...?
Cat: Hi! (comes tap-dancing) Don't worry there's nothing wrong with me. I'm doing this on purpose. (finishes her tapping) Too-doo!
Tori: It's ta-da.
Cat: Ta-da!
Beck: Why are you tap-dancing?
Cat: 'Cause I'm auditioning for a new musical and I have to tap dance.
Beck: Ah.
Cat: Hey, people are talking to Robbie, that's so weird!
André: They're all excited about the video on TheSlap.
Tori: What is this video?
Beck: Show her.
André: Alright.
Robbie: And I can also do it with this fist. (demonstrates, then laughs with the other teens)
André: What did he call the video again?
Beck: "The Hambone King".
Tori: Hambone?? Did you say "The Hambone King"?
André: Wait till you see this.
Cat: What's hambone mean?
Tori: (uneasy) Who cares?
André: Look.

Tori: (feeling uneasy) I uh, I got to get to Sikowitz's class.
Cat: We don't have Sikowitz today.
Tori: It's a different Sikowitz! (leaves)
André: What's her deal?
Beck: Not sure. Do you know my problem with these sunflower seeds?
André: So, first you're going to steal my seeds, and now you're going to criticize?
Beck: Yes. It's too much trouble to open.
Cat: I'll open them! (Pours seeds on the floor, to Andre's chagrin, and starts tap dancing on them)
Beck: Um...Cat?
Cat: What?
André: Baby, no one wants to eat sunflower seeds that have been tap-danced on the floor.
Sinjin: Ooh! Pre-cracked sunflower seeds! Don't mind if I do! (starts eating them off the floor like a bird)

Tori: Why'd you stop?
Robbie: I... I need to get some air. (heads for the patio)
Cat: There's air in here!
Robbie: I DON'T WANT YOUR AIR!! (shuts the door)
Tori: (follows him outside in confusion)
Cat: What's wrong with my air?

Jade: Robbie.
André: Come on man, it's-
(Jade and André looks at Cat, who is still tap dancing, in annoyance)
André: Come on Rob, it's not so bad.
Jade: Okay, big deal you lost a hambone competition.
Robbie: (Squeaks)
Jade: It's over. And it's not like the whole world saw it.
Cat: Uh-huh. It's all over the internet.

Cat: This Hambone battle is really scary.
Jade: We're about to watch two nerds compete by slapping themselves. I think we'll be okay.

Tori: Hey! I'll take on the Hambone King.
Cat: But Tori, you haven't hammed boned in years!
Tori: Well now I have a reason.

Tori: Hey, idiots! You wanna talk, or hambone?!
Jarold: Tori Vega.
Tori: What up, Jarold?
Jarold: Still mad about me and Suzy McCallen?
Tori: You still pick your nose, and eat it?
Merl: Don't waste your breath on her, king.
Tori: Oh hey Merl! I see you're still sniffing Jarold's butt!
Merl: Hey, that was a dare!

Click here to see the photo gallery for The Hambone King. 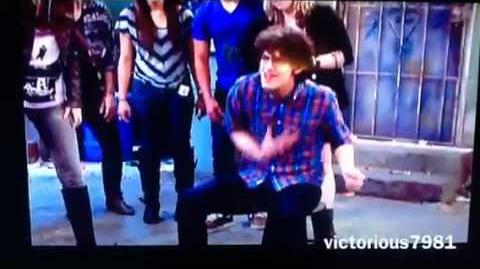 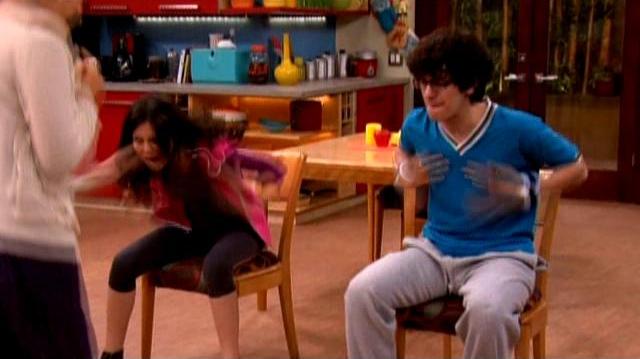 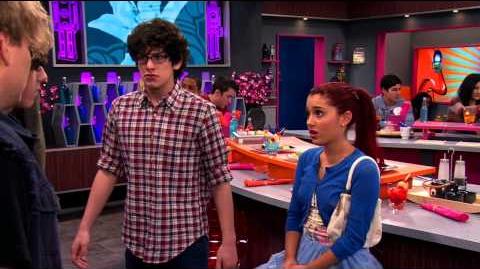 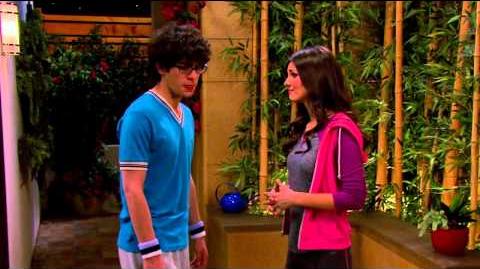 Retrieved from "https://victorious.fandom.com/wiki/The_Hambone_King?oldid=839772"
Community content is available under CC-BY-SA unless otherwise noted.