This page is about the episode. You may be looking for the short film of the same name.

The Blonde Squad is the 13th episode of Season 3 of Victorious and the 47th episode overall. It was originally scheduled to air on June 23rd, 2012, however it was pushed back to air on June 30th, 2012. This episode premiered to 3.8 million viewers, slightly higher than Tori Goes Platinum. Nickelodeon split this season in half, so this serves as the season finale.

Tori, Jade, and Cat decide to go to Nozu after a day of filming Beck's new movie called "The Blonde Squad" but don't take off their blonde wigs and their blue contacts because Tori wants to know what it's like to be blonde.

At Nozu, Cat meets a cute boy named Evan Smith on her way to the bathroom, and they sit down together and chat. The next day, Cat is happier than usual due to her date and gives out free hugs, explaining her day to Tori and Robbie. When Tori asks Cat how Evan reacted to discovering what Cat really looked like, Cat becomes confused and realizes that after talking to him for five hours, she forgets to tell him she is a red-headed, brown-eyed girl. Afterwards, Cat starts to freak out and cries, worrying about Evan's thoughts on her real self. Tori and Robbie constantly tell her that she is beautiful and she is overreacting, and when Cat talks to Robbie about Evan, Robbie gets jealous. During lunch, Jade checks Evan's SplashFace profile, and shows that all of his ex-girlfriends are blondes, he likes blonde girls, and dislikes people not being themselves, which only leads to Cat freaking out more.

On the night of the premiere of Beck's movie, Jade and Tori expect Cat to be herself, however, Catwalks in to meet Evan wearing her blonde wig, which Robbie helped her with, and blue contacts. During the movie, André's grandmother's pet bird (see subplot) lands on Cat's wig and begins to pull her wig off. Beck pauses the movie, and Tori and Robbie chase Cat out.

After they get out, the bird flies off of Cat's wig, and Cat begs Robbie to fix her wig, but Tori tells him no and starts telling Cat that Evan will still like her for who she is. Cat finally gives in, and Robbie takes Cat into a room to take off her wig, and when Evan comes out, he tells Cat she is beautiful but that he is only into blondes and breaks up with her, revealing Cat's suspicions were right all along. This breaks Cat's heart, and she sits in the Black Box Theater and wishes to not be comforted by Tori and wants to be alone. However, Robbie walks in to cheer Cat up with a song he had been working on and performs his song "I Think You're Swell" to Cat. In the end, though, she only responds by saying that maybe she should dye her hair blonde, possibly still insecure about herself.

When André lets Larry out for air, he flies out into the studio. André tries to catch him using "special" bird seeds, but it doesn't work and he catches Sinjin instead of the bird with the seeds, which leads to Sinjin's addiction to the bird seeds. In the end, André is seen trying to catch the bird. It is unknown if the bird is caught, though his TheSlap page indicates that Larry hasn't been caught yet.

The episode was viewed by 3.84 million viewers on its premiere night. It was the most-watched show on Nick for the week. It is also the third most-watch episode of the season, slightly ahead of Tori Goes Platinum, and behind The Breakfast Bunch and Tori and Jade's Play Date. This episode received over a million more viewers than the last episode, Crazy Ponnie.​ It also placed #21 on the cable top 25 lists for the week.

Tori: There has been a burglary!
Jade: They could still be here!
Cat: Bananas! (Tori, Jade, and Cat get into fighting poses)

Tori: Under desk, clear...
Cat: Closet, clear...
Jade: Middle of the room, this area from here to like, right around here, this whole section I'm indicating with my hand gestures, clear!!!

Tori: Tawni, you're holding your banana backwards!
Jade: Are you sure? 'Cause it's my understanding that the banana- (knocks herself out)
Cat: I told the chief they shouldn't let idiots on The Blonde Squad.

Tori: You see what blonde girls get? Free stuff!
Jade: It's a magical night.

Tori: Ahh!!!! See what blonde hair does for a girl?
Jade: Ughhhhrrrr.

Cat: (as Larry lands on her head) I gotta go freshen up!

Evan: Wait, don't you want to hit the bathroom first?

Cat: No, you seem way more fun than a bathroom!


Reese: Can I borrow your soy sauce?


Tori: Ohhh. (looks at Jade) He wants to borrow our soy sauce.
Jade: Wow?
Tori: What's your name cute thing?
Reese: Reese.
Tori: Well Reese, if you want to hang with us blondes-
Jade: My god...

Tori: Oh look, it's low sodium.
Reese's Dad: What are you, a doctor?

Robbie: (singing) And later if you're hungry I'll make you some spaghetti.

Cat: Would there be meatballs?

Robbie: (nodding) There would.

Beck: So you and the bird are cousins?

Tori: This is so cool! We're blondes! Woah! We're like princesses!
Jade: Can you be the princess who gets poisoned? (Smiles)

Robbie: Well, if it isn't the Vega girls!
Trina: Gross.
Tori: You're in a good mood.
Robbie: Yup. Cause I've finished the song I've been writing.
Tori: Oh, is it another song about worms?
Robbie: Not this time!
Trina: I hate this guy.
Robbie: This song's about a girl.
Trina: Look, Robbie, I already told you I'm not interested in you.
Robbie: I didn't mean you. I-
Trina: Okay, you know how some girls say "I only like you as a friend"?
Robbie: Yeah.
Trina: I don't even like you that way.

Cat: (While crying) What is this?

Cat: They're so big!

Cat: (Referring to Evan) If he sees what I really look like he's gonna be disappointed and-

Robbie: (Throws the bottle of water) That does it! Caterina Valentine, I will not sit here anymore and listen to you talk bad about yourself! You're adorable. Any guy would be lucky as cheese to go out with you.

Cat: Thanks, Robbie, that's really sweet, but you don't know how guys think.

Robbie: What? Hah- how could- Good day! (Walks away angrily)

Beck: Thank you for coming to my semester project, a funny short film called The Blonde Squad.

Evan: Is that you?

Cat: It was a blonde wig. And the blue eyes were fake. It was for Beck's movie. This is me.

Evan: Totally. But I'm really into blondes. Later. (Walks away)

Robbie: Come with me. (Takes Cat's hand and starts walking)

Cat: Oh, remember we have to let Robbie take our wigs off.

Tori: Or we could go to Nozu in our wigs.

Tori: Cause, haven't you ever wondered what it's like to be a blonde?

Cat: I've wondered that. I've also wondered why lemonade is a drink and first aid is for the injured. Like, what if a thirsty person gets injured? Do you give him first aid first and then lemonade? Or lemonade first and then second aid?

(Tori stares at her)

Robbie: I think that Evan guy is really dumb for not seeing how great you are.

Robbie: You want to hear the new song I've been working on?

(Robbie sings 'I Think You're Swell').

Sinjin: Don't you think I would if I could!

Andre: Larry, I got the wig on and it's full of birdseed! Come eat from my wig!

Jade: (To Robbie) Did you try to play pirates with her?!

Tori: Cat's Buggin cause her and that guy Evan hit it off but he thinks that she has blond hair and blue eyes.

Jade: You never told him you were wearing a wig?

Cat: I forgot! What if he hates redheaded girls!

Robbie: You're being silly.

Cat: Evan. I forgot what his last name is it rhymes with a sniff.

Tori: Uhhh could it be Smith?

[Talking about Evan's Splashface page]
Tori: What are his likes and dislikes?
Jade: Uh... sushi, video games...girls with blonde hair and blue eyes.
Tori: Dislikes?
Jade: People who pretend to be something they're not.
Cat: Oh no, can I have your underwear again?!

Click here to see the photo gallery for The Blonde Squad. 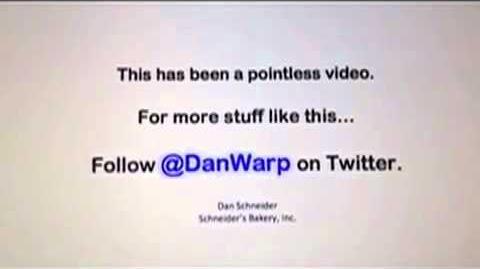 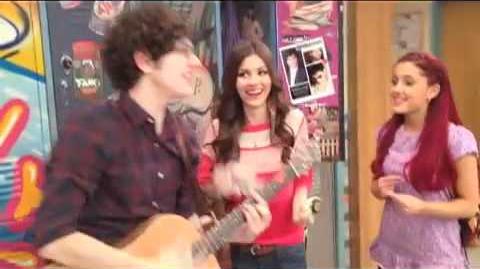 Victorious - On Set Silliness!!!
Behind the scenes of The Blonde Squad 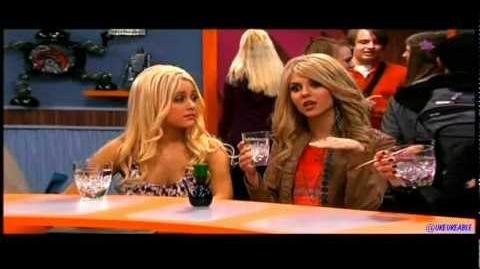 Retrieved from "https://victorious.fandom.com/wiki/The_Blonde_Squad?oldid=845132"
Community content is available under CC-BY-SA unless otherwise noted.