TheSlap.com is the Hollywood Arts social networking website where the students post statuses, photos, videos, and news at the school. Other students comment on what they do and follow them. It is similar to Facebook, MySpace, Twitter, YouTube, and other social networking sites. The site used to be an active website where there were games and posts by the Victorious characters, but the site now redirects to nick.com.

In the show, TheSlap is a website that the students at Hollywood Arts use. The characters' posts to TheSlap are often used in episodes to transition between scenes. On the real website, the main characters post updates, photos, videos, and blogs.

Characters that are on TheSlap include:

Much like in the show, you can comment on the stars' posts, watch videos, and look at pictures put up by the characters. The site has extras from the show, games, and music. It was rumored that Helen may get an account, though it never happened. TheSlap is also a bookmark in the iCarly theme, like DanWarp, Zaplook, or SplashFace.

The website completely shut down in April 4, 2018 after Dan Schneider left Nickelodeon. The website now redirects to Nick.com, as does iCarly.com and SamandCat.com.

Once you have an account, you can add favorite videos pictures or games and comment on people's statuses. You most importantly can create an avatar, as there is a spot on the home page spot that is called Avatar of the Week. As seen in the Pilot, when tweeting, you can choose a text font, size and style, attach links to text, write your mood and choose an emoji, though only the characters can use this feature, as TheSlap is only for Hollywoord Arts students. 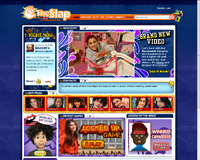 By Beck and Jade

By Tori and Cat

Depending on the holiday or season coming up, the background on TheSlap changes. After the holiday is over, it changes back to the original background.

"Whose Shoes Are These?" challenge.
Community content is available under CC-BY-SA unless otherwise noted.
Advertisement