Star Spangled Tori is the 12th episode of Season 4 of Victorious and the 59th overall. It is the penultimate (second-to-last) episode of the series.

As Cat, Jade and André perform an improv act, Tori is rehearsing the lines for Star Spangled Banner. When asked, Tori replies that she was chosen to sing for a baseball game. The class and Sikowitz remind her that any mistakes in singing the anthem would be broadcasted and seen by millions of people, with Jade referring to the story of a flubbed line in a game in Boston, which ended with the singer moving out of town. As Tori assures everyone that she won't make any errors, Jade starts taunting Tori, causing her to flee from the classroom. As Cat, Jade, André, Beck and Robbie watch on TV from Tori's house, Tori begins singing, her mother Holly among the crowd. During her performance, a St. Bernard runs across the field and snags Tori in its leash. While being dragged by the dog, Tori keeps on singing. When an embarrassed and humiliated Tori arrives home, she is informed by Jade that the video of her being dragged across the pitch has already been uploaded online by 50 people. At school, Tori tries to keep a low profile to prevent humiliation but fails when Sikowitz pretends to be her, being dragged across the hallway by someone donning a dog costume. A humiliated Tori is then greeted by André and Beck. Thinking they will show her the failed performance, Tori is shocked as a TV host named Chris Burm wants her to perform on his show at any time and perform any song of her choice. An ecstatic Tori, seeking redemption, is then halted by an untrusting André and Beck, telling her that Chris has previously pulled pranks on his guest live. Tori agrees to go but is accompanied by André and Beck. On the show, Chris tells Tori and the crowd present about her harrowing experience, her input on the dog and eventually brings on set Buck, the actual dog who dragged Tori across the field. Chris informs the crowd that Tori will be performing, exciting them and Tori herself. But when Chris calls for a commercial break and Tori walks off-set to rehearse, Chris explains his true intention of bringing out Buck is to replace him with a stuffed dog filled with spaghetti and loaded with a squib. He intends to humiliate Tori even further by showering her in pasta while she performs. André and Beck, hiding among the crowd, hear this revelation and formulate a plan to stop Chris. As Tori's performance begins, André and Beck sneak out onto the stage. Beck pretends to injure his arm, distracting the stagehands present while André finds and retrieves the squib. Beck later positions the explosive behind Chris' chair, with an unsuspicious Chris ready to push the remote to detonate the squib. As Tori's song ends, Chris activates the squib, launching himself into the ceiling and falling flat on his stomach back down to the floor. A shocked and worried Tori then calls for a break.

Jade and Robbie start getting suspicious when they notice Cat acting oddly, such as buying a bag's worth of soda, brushing her teeth at school, and parking her bike at school after hours. They both chase Cat around the school but lose her at the Blackbox Theater, where they decide to drop the chase until they see her again at Tori's house. Once again, they question what she's been up to but are interrupted by Tori singing the National Anthem. Afterwards, they drive her to the school by her request and stealthily follow her. They track her to the school's attic which she reveals to be her new living space for a long time (the reason being that her parents and brother are in Idaho for 6 to 24 months to keep her mental brother institutionalized, and Cat had no nearby loving relatives to stay with. Her Nona was also apparently not around, she having moved to Venice, Italy). Both Jade and Robbie don't like the idea of leaving Cat alone in the attic with over-sized rats, so Robbie spends time with her while Jade discovers that Cat's Nona is actually in Venice, California. Cat is then able to leave her living space and stay with her Nona until her family returns.

Andre: No one here is making fun of you.

[Tori sees Sikowitz being dragged across the floor] 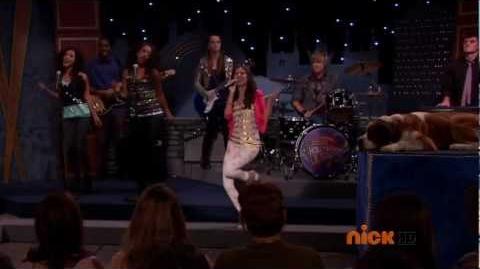 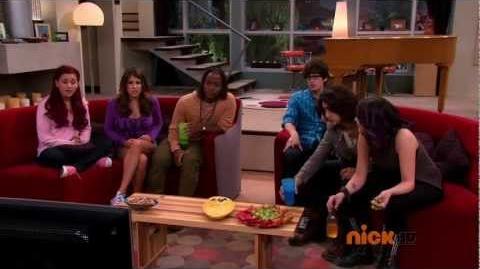 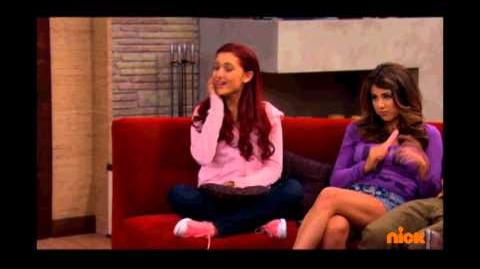 Retrieved from "https://victorious.fandom.com/wiki/Star_Spangled_Tori?oldid=837324"
Community content is available under CC-BY-SA unless otherwise noted.