Victorious Wiki
Register
Don't have an account?
Sign In
Advertisement
in: One Appearance Only, Minor Characters, Characters,
and 4 more

Sgrodis is a hotel manager in Yerba and is the brother of Festus.

He appeared in the episode Locked Up!. According to TheSlap, Sgrodis means "younger brother," even though he's four years older than Festus. His phone number begins with 056347718136575283667743 but is never fully shown due to Tori Vega interrupting Festus while he was giving her the number.

He is shown to be very friendly and welcoming when Tori, André Harris, Robbie Shapiro, Jade West, Cat Valentine, Beck Oliver, Trina Vega, and Erwin Sikowitz arrived at his hotel like sniffing Tori's hand to greet her as a sign of friendship (although she did not like that very much). It is also revealed that he likes eating mushrooms because he had a bowl full of them when the girls were about to confront him about leaving the country. When he tried to calmly convince them to stay (even tried bribing them with Yerbanian gravy) and they refuse to do so, he became indifferent towards them by pulling down some-type of alarm to alert the Yerbanian guards to come in and block their exit so they wouldn't leave Yerba.

Sgrodis was later present when Tori Vega and the other prisoners are performing "I Want You Back" before the Yerbanian Chancellor, his military aides, and those who were invited. 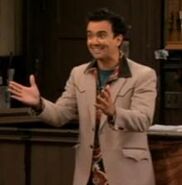