Victorious Wiki
Register
Don't have an account?
Sign In
Advertisement
in: Characters, Adults, One Appearance Only,
and 3 more

Russell, nicknamed Russ, is a character that only appeared in the episode Stage Fighting. He was a visitor at Hollywood Arts High School there to teach the students the art of stage fighting. The class thinks he looks like a Steve.

Russ is portrayed by J.R. Jaus.

His teaching method involved demonstration. He taught that it was all about angling the fight scene so it looked like they were fighting. He also used sound effects and told his example (Cat) to react like he told her.

Tori walks in on Russ and Beck having a fake fight and jumps on his back. Russ seems shocked and enraged and screams, "WHO IS THIS CHICK?" Tori was only trying to protect Beck from the fight, because she thought it was real.

Beck and Russ had met before Stage Fighting; Beck said they took an acting class together and they were practicing a fight scene. This must mean Russ can't be much older than Beck, since they were in the same class. Russ is first seen having a fake fight with Beck.

Russ chooses Cat to be his example in demonstrating fake fighting. He pretends to punch her two times - one that looks fake, and another that looks real. He teaches her to block stage punches. She thanks him for not actually hurting her, which may mean she doesn't very well trust him.

When the teacher asks if the class had any questions for Russ, André blurts that he "thought his name was Steve." The rest of the class agrees that Russ does in fact look like a Steve. Russ gets enraged and defends that his name is Russ. 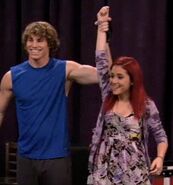