In Sikowitz's flashback in How Trina Got In, Eikner is part of the group that was to judge Trina's audition only to be called away by Sinjin getting his head caught in a vending machine, leaving Sikowitz to judge Trina himself.

Two years prior to the events of The Great Ping Pong Scam, he was, according to Sikowitz, in danger of being fired as the superintendent felt that the school wasn't winning enough trophies.

After Tori's stellar performance in the Big Showcase in the Pilot, Eikner, upon finding out that she was not already a student of Hollywood Arts, invited her to attend the school.

His last chronological appearance occurs in Helen Back Again where he retires so as to move to Hawaii and spend time with his new girlfriend, being replaced by Helen Dubois. 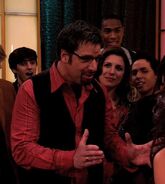