Mr. West is the father of Jade West. Although he is not in a relationship with her mother, he does have a wife. He appeared in Wok Star, as a person in the audience of Jade's play production, Well Wishes. He has also been mentioned a few more time on TheSlap by Jade. He was portrayed by Roy Werner.

Attempting to make her dad see that she has talent and that her dreams are actually worth something, Jade invites him to come see her play, Well Wishes. Once the play is done, Tori forces him to say something. After sizing up Tori, whom he seemed to approve of, Mr. West surprised both both girls by deeming the play to have been "excellent." When Jade refused to take out her piercings however, he promptly left the building without a second thought.

As part of Tori and Jade's acts for The Wood, Mr. West had his boss deliver a junker car for the two girls to destroy.

When Tori shows the gang her "special talent", shooting a bow and arrow with her feet, Jade bitterly asks if her father taught her that, before getting very upset that Mr. West has no interest in spending time with her or teaching her anything.

In her second video, Jade mentions that she hates when people say "Have a nice day." She says "How do you know that my dad didn't get fired? Again?" suggesting that her father gets fired a lot.

Jade mentioned her father in her video Jade with Tots 2, saying:

"My daddy hates everything I stand for. He just wants to hang out with his new wife and her yappy little dog. And he's never kept one promise, ever."

Later, she talked about how her dad only made her breakfast once in her whole life, and she ended up throwing up after eating it. She seemed sad the whole time she was talking about her father.

This means that he divorced her mother and got a new wife.

One Thanksgiving, Jade locked one of her cousins in the basement. Mr. West promptly called the cops on her.

Summarized by Tori as "cold and judgemental", a description that even the perpetually contrarian Jade never challenged, Mr. West is said by Jade to practically hate her and everything she likes, disapproving of her tattoos and piercings. He is also said to think that creative activities (e.g. acting, play writing, directing, singing,) and the people who perform them are stupid.

Several of Jade's Slap posts imply that he is very embarrassed by his daughter and her antics, having called the police on her when she locked her cousin in the basement. Despite, or perhaps because of, this, he doesn't seem very emotionally invested in Jade, making only a half-hearted attempt at having Jade remove her piercings and having no emotional reaction when she refused or simply calling the police instead of talking to Jade directly. By contrast, he seems very close to second wife and son, seemingly devoting most of his free time to them. 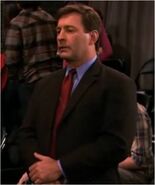 Add a photo to this gallery
Retrieved from "https://victorious.fandom.com/wiki/Mr._West?oldid=839492"
Community content is available under CC-BY-SA unless otherwise noted.