Mammaw Shapiro is Robbie's grandmother, who has a problem using her new computer. She lives with her husband Maury Shapiro and only appeared in the episode The Birthweek Song. She is shown to be a complaining individual, and her conversations with her husband are most often negative. When she meets Cat, who she does not seem to like, she gets annoyed and asks Robbie if they're dating. She tries to hook him up with another girl, Brenda. She seems to not be very tech savvy. In fact, she knows extremely little about technology. Her real name is Sylvia.

She is portrayed by Renée Taylor.

She is over-bearing, critical and rude. She always trying to interfere her grandson Robbie's relationships and his life. She is total nuts and clueless when Robbie tried to explain the internet to her and it drives Robbie crazy. She even disrupted his class when Robbie is pointing out a presentation in school while she was online. She and Maury don't exactly get along, but they put up with each other. She is not exactly a fan of Cat Valentine, she kind of figure out that Robbie likes her and Cat tells her they are just friends. She even tried to set up Robbie with another girl Brenda who was a geek like Robbie and they both share the same puppet and teddy bear. But Robbie wasn't interested. Robbie disconnect the internet and he and Cat leaves and that was the last time that he and his Grandmother spoken that day. 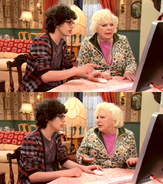