Locked Up! (also known as Victorious: LOCKED UP[1]) is a Victorious hour-long special that was promoted as a movie.[2] It marks the sixth and seventh episodes of the second season and the 26th and 27th overall. It is a 1-hour special that first aired on July 30, 2011 at 8 PM. Two songs were featured; the first, "All I Want Is Everything" is an original song, and the second is "I Want You Back", originally sung by the Jackson 5 brothers. This is the 2nd hour-long special, after Freak the Freak Out

The episode starts when Festus, who runs the Grub Truck, overhears that Tori and her friends have no vacation plans. He tells her that his brother lives in a country called Yerba, and if Tori and the gang perform there for seven nights, their whole vacation will be free.

Tori is persuaded by her parents David and Holly to take Trina along and have an adult supervise them in exchange that they get her a car.

The Victorious gang takes a trip to Yerba, an island nation. Tori thinks she planned the perfect vacation, with luxurious foods and service, but lets everyone down when they are placed in a rundown hotel room with critters and insects as well as disgusting meals. André also gets a vampire moth bite and has severe swelling on his neck. On top of that, there are soldiers everywhere because, as they also find out, the country is at war. When they go to complain, they are held to their promise that they will perform a song each night.

But while performing for the chancellor, Tori's shoe comes off her foot, flies across the room, and hits the chancellor in the eye. Robbie reveals that his was last good eye since he has an eye patch on the other side. She is then sentenced to four years in a Yerbanian prison. While Tori is in prison, André, Robbie, Jade, Cat, and Trina tell Tori that Beck and Sikowitz are trying to get through to Tori's parents, the United States Ambassador, and/or anyone high up who can negotiate for Tori's release.

Later, when they try to get Tori released, Robbie accidentally kills the chancellor's octopus (which was given to the chancellor as a gift from the Prince of Gustavia), causing the rest of them to be put in prison.

Eventually, Tori (and Sikowitz, to some extent) concocts a plan to get out, which involves a hit song. After performing I Want You Back with the other prisoners for the chancellor, the gang sneaks out and escapes across the border in a duck truck.

The special has received mixed reactions from fans but overall most of them were positive. It premiered to a total of 5.201 million viewers and had 4.073 million viewers on the 11 AM repeat the following day.

Jade: Before you booked our trip here, you forgot to find out that this is the worst country on Earth?!
Tori: [pauses] Yeah.
Sikowitz: Jade, don't be such a Crabby-Cathy!
Jade: I have every right to be a Crabby-Cathy... [turns head and sees two girls playing with Beck's hair] Crabby-Cathy is about to get a little bit crabbier!
Cat: I think those girls like Beck's fluffy American hair.
Jade: Clearly. [walks over the couch in front of Beck and the two girls playing with his hair] Hey! Get your hands off my boyfriend's head!
Girls: [hiss at Jade]
Jade: [hisses back more fiercely]
Girls: [freak out and walk away]

Prisoner: Hey! How you make your hair so... fluffy?
Beck: Well, it all starts with a quality shampoo and conditioner.
Prisoner: Ohhh, conditioner... [the prisoners nod]

Prisoner: Give me your sevens!
Tori: Uh... go fish?
(This line was cut from the actual episode.)

Robbie: Where have you been?!
Cat: I joined the prison gang!
Jade: And you said yes?
Cat: I promised the gang ladies that I will make us all special T-shirts!

Tori: Where did you get that outfit?! [Sikowitz is wearing a Yerbanian Soldier Uniform.]
Sikowitz: They sell these at the hotel gift shop. How stupid is that!

Tori: What's going on?
Beck: My Aunt says we can't go to Cancún.
Tori: Aw...how come?
Beck: She found out I was bringing Jade.
Sikowitz: HA!
Beck: So I heard some of you guys are going to Yerba.
Tori: Yes, yes we are. Would you like to come to Yerba with us, Beck?
Beck: Oh, that'd be great, thanks.
Tori: Jade...do you have a question for me?
Jade: [quickly and shyly] ...Can I come to Yerba? [turns her head away]
Tori: Maybe, but first, you gotta give me a hug... [whispers] Come on, come on, just do it.
Jade: [whispers) No I don't want to.
Tori: Do it.
Jade: [hugs Tori]
Tori: Aww, see! Givin' Tori a big ol' hug isn't such a bad th- okay, that's really tight... Oh God, help me! Somebody do something! [falls down due to Jade squeezing her too tight]

Tori: You guys make it seem like we're in the middle of some kind of-
[bomb goes off]
Everyone: AHHHHH!!!!
Tori: We are getting out of this country!

Robbie: [climbs out of the bed between Trina and Cat]
Tori: Dude!
Trina: Robbie!
Cat: Hi.

Tori: You have a nice truck.
Festus: Don't lie to me.
Tori: I'm sorry.

Mrs. Vega: Trina, get an ice pack!
Trina: Nooo, I have to go paint my nails! [runs upstairs]

Trina: [runs inside angry] I'm never playing mini golf with you guys again!
Mrs. Vega: Promise?
Tori: What happened?
Mrs. Vega: Trina missed a putt and got upset so she threw the golf club at your father!
Trina: No! I threw my golf club and Dad just stood there and let it hit him!

Tori: What's so bad about your rooms?
Trina: Well, we can start with the foreign man I found in my closet!
Robbie: And there was a grenade in my toilet.
Rex: They got nicer hotels in Northridge!

Cat: One time when my brother was in prison, he told the people in charge he was a vegetarian so they gave him special meals. Oh wait, that was on an airplane.

Sgrodis: You two stay quiet and don't cause trouble.
Sikowitz: [loudly] Where is Tori?!
Trina: [loudly] I wanna see my sister!!!!

Trina: Has anyone tried to beat you up?
Tori: No; I've got some street cred in here. 'Cause they think I'm the psycho girl who stabbed the chancellor in his eye.
Cat: ... You are.

Trina: We are leaving this country now!
Sgrodis: You kids promised to make sing-song here for seven nights.
Sikowitz: Well, I'm afraid that's a promise they're going to have to break.
Sgrodis: Are they? [pulls a lever and three Yerbanian soldiers come in]
Tori: ...So? What song should we sing tomorrow night?

Tori: I'm ready to see the chancellor I want to confess the truth.
Solider: Alright we will take you to the chancellor.
[Long pause]
Tori: Can you take me now...
Solider: OH NOW! Sure! Give me key! Trina: Okay Robbie and I just looked at our rooms and there's no way I'm staying here.

Click here to see the photo gallery for Locked Up!. 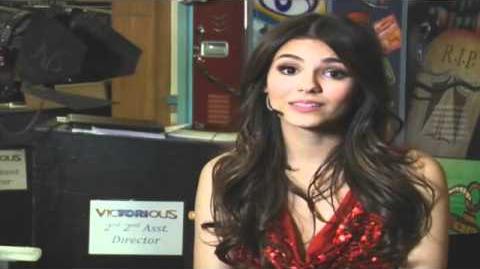 Behind the Scenes & Bars 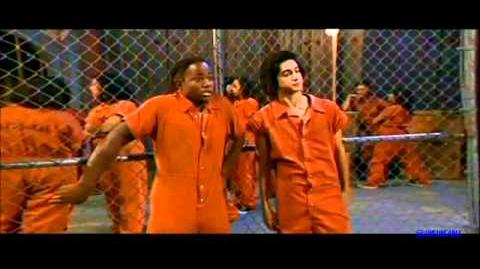 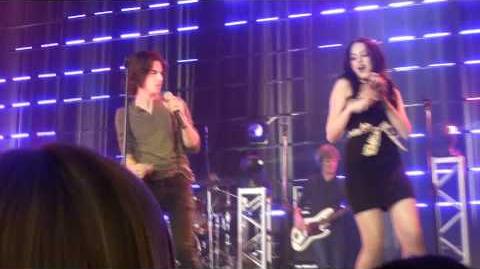 Victoria Justice & Cast - I Want You Back (LIVE)HD