watch 03:27
Wiki Targeted (Entertainment)
Do you like this video?
Play Sound

Leave It All To Shine is a song featured in the iCarly and Victorious crossover iParty with Victorious. This song is a mash-up of their respective theme songs, Leave it All To Me and Make It Shine. It is sung by the every member of the primary casts of both shows and Kenan Thompson (episode only), who hosted the party at which the song was sung. It was written by Dan Schneider, Lukasz Gottwald and Michael Corcoran.

During iParty With Victorious, Tori is shocked to find out that Steven Carson is also dating Carly Shay, the host of iCarly. After successfully exposing Steven, Tori alongside Carly and their respective friend groups help celebrate their success by combining their theme songs into a successful performance.

Carly:
I know you see
Somehow the world will change for me
And be so wonderful

Tori:
Here I am, once again.
Feeling lost, but now and then

Carly (and Sam):
Live life, breathe air
(I know somehow we're gonna get there and feel so wonderful)

Tori (and Jade):
When you figure out how,
You're lost in the moment you (disappear)

Carly, Freddie, Sam and Spencer:
It's all for real

Carly and Tori (Kenan in the episode version):
I'm telling you just how I feel!

Tori with Cat and Jade:
You don't have to be afraid to put your dreams in action,
You're never gonna fade,
You'll be the main attraction.

Carly (with Beck and Robbie):
Wake up the members of my nation,
(it's your time to be)

Carly (with Freddie, Gibby and Spencer):
'Cause there's no chance unless you take one!
(And the time to see)

Tori (with Sam and Trina):
Now if you live in your imagination
(Tomorrow you'll be everybody's fascination)

Carly and Cat with André:
See the brighter side of every situation.

Tori (and Carly):
In my victory. (Jade: in my victory)
(Just remember me)
When I make it shine.

Carly:
Leave it all to me!

Jade with Sam:
When you live in your imagination

Cat:
Leave it all the me!

Tori:
When I make it shine

Carly:
Just leave it all to me!

Leave It All To Shine iParty with Victorious Dan Schneider 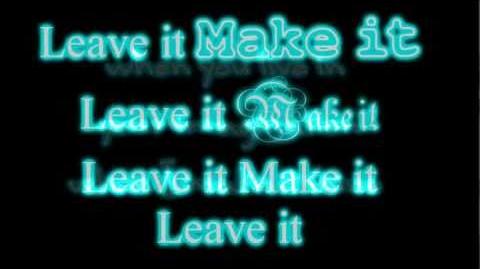 Listen to the song!
Retrieved from "https://victorious.fandom.com/wiki/Leave_It_All_To_Shine?oldid=858214"
Community content is available under CC-BY-SA unless otherwise noted.