Kwakoo is one of the workers at the Japanese restaurant, Nozu. Aside from regular restaurant work, Mrs. Lee also uses Kwakoo as an enforcer as he's very good at catching customers trying to sneak out of the restaurant without paying. His first appearance was How Trina Got In. He, Robbie, and Tori had to chop some squid because Robbie and Tori couldn't pay the bill. When Robbie accidentally breaks a pile of dishes, he had to massage Kwakoo's feet. He appeared again in The Hambone King when he asked Robbie for his autograph.

He is portrayed by Née Léau. 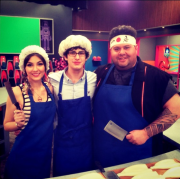