Joseph "Joey" Ferguson is the owner of Karaoke Dokie and the father of Hayley Ferguson. His first and only appearance is in the first Victorious movie/extended episode Freak the Freak Out.

His daughter, along with her friend, Tara Ganz competed in the Karaoke against Jade West and Cat Valentine. Even though Jade and Cat got much more applause than Hayley and Tara did, he still (unfairly) chose both Tara and his daughter as the winners.

He is portrayed by Tom Virtue. 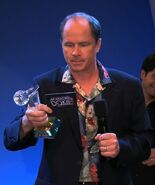 Add a photo to this gallery
Retrieved from "https://victorious.fandom.com/wiki/Joey_Ferguson?oldid=838656"
Community content is available under CC-BY-SA unless otherwise noted.