Start a Wiki
watch 01:51
The Loop (TV)
Do you like this video?
Jandrobbie is the tri-pairing of Jade West, André Harris, and Robbie Shapiro. The three are all good friends, but Jade seems to be closer to André than Robbie, and Robbie and André seem to be closer to each other than to Jade. 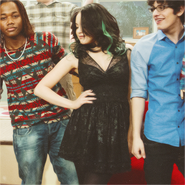 Retrieved from "https://victorious.fandom.com/wiki/Jandrobbie?oldid=834466"
Community content is available under CC-BY-SA unless otherwise noted.