When a promise from Tori's childhood comes back to bite her, she’s stuck as Trina's personal assistant for one month. Trina has many ridiculous things that she has planned for Tori to do for her.

When she learns from André that there is a contest going on to find the letters that spell "KE$HA" and win a free private concert from her, she jumps at the chance. Trina says that if she can do it, Tori can stop being her assistant.

With the help of Beck, Robbie, Cat, Jade and Rex, they find K, E, and A. As they search through tons of ice cream containers, Robbie suggests not letting the unused ice cream go to waste. He decides to take it to the park and give it to the kids. While everyone knows that Robbie means well, Beck tries to warn him that this could be misinterpreted as pedophilia. However, Jade, amused by what the kids' mothers might do and knowing the Robbie needs to learn this for himself, urges Beck to just let Robbie go. After a while, the gang is out of ice-cream, and Jade mentions that Beck went to buy ice-cream and may have been almost there. As expected, Robbie returns after having been assaulted by protective mothers. Beck returns and tells them to check Ke$ha's newest update, and they find out that the contest is over because a dude from Northridge already won. Since the contest is over and Tori did not win, she had to go back to being Trina's assistant and help her take a bath.

Next day in school, Beck and Jade go check in on Tori and she tells them that Trina "sleep sweats." Trina asks for Tori and demands her to answer her phone because it's Lendle and he wants to be her boyfriend. Trina tells Tori to tell him that she died. Tori did as told and Lendle asks her out. Trina confronts Lendle because she got mad that he hit on her sister after she died for 10 seconds. Cat calls Tori to see a video online. Ke$ha reveals that the dude from Northridge faked it and the contest is officially back on.

Tori and her friends go through many buckets of Ice Cream. Cat finds the H, and everyone is happy for her. They figure that the hardest letter, $, will be in the least popular flavor of ice cream, which is Funky Nut Blast. Jade, Cat, Tori, and André race to the Handy Quick in Calabasas to find only one bucket of Funky Nut Blast containing an H, until Cat finds a boy eating Funky Nut Blast. Tori asks for the bucket, but he refuses the offer until Jade promised to pay him $30. Cat accidentally talks about winning the concert, seeing the letter found at the bottom of the carton. But the boy wants to make another deal, to come to the private concert and kiss Tori, Cat, and Jade.

The kids end up seeing Ke$ha perform her latest single, Blow. The little boy now asks the girls for their kiss, but they trick him by locking him out of the house because they don't want to kiss him. Trina sees the little boy locked out and feels bad for him and lets him in, the boy tells her what the girls did to him. Trina offers him a kiss, but the boy, disgusted, promptly leaves.

The episode was received very well by most fans and premiered to 4.01 million viewers, making it the most-watched scripted cable telecast of the night (second overall only to an NBA playoff game between the Lakers and the Hornets).

Robbie: Cat. Cat, come on. You can't be mad at me over something I did in your dream.
Cat: It's what you didn't do.
Robbie: Well, will you at least tell me what I didn't do?
Cat: Fine! These little kids were trying to eat us, and you wouldn't even try to help me, you were just crying and yelling "No, no, don't eat me! Eat her, eat her!"
Robbie: Well, I'm sorry, and if a bunch of little kids ever really do try to eat us, I promise to…well, why shouldn't they eat you first?!
Cat: Robbie!
Robbie: I want to live! There's things I've never tried, things I really, really, really wanna to do!
Tori: What do you really, really, really wanna do?
Robbie: Uh, ride a pony…take a cooking class…other things…

Cat: Just ice cream?
André: Uh-huh.
Robbie: That's what you're gonna eat for lunch?
André: Nope, it's been in my locker all day, so, I'm gonna drink it!
Cat: Why?
André: Cause I wanna meet Ke$ha…aw, dang it!
Tori: Ke$ha's not in there?
André: No, I got another stupid K!

Tori: [Reading the note she wrote] When I, Tori Vega, am 16 years old, I will be married to a handsome prince and we shall live in a magic sugar castle.
André: That didn't happen.
Tori: I know that didn't happen.
Trina: Yeah, and read what you said you'd do if it didn't happen.
Tori: I will be Trina's assistant and do whatever she says for a whole month..
Trina: That's right!
Tori: So? I wrote this when I was six.
Trina: Yeah, and who was it who said "you have to keep your word no matter how long ago it was?"
Cat: Martin Luther King!
André: No, Martin Luther King gave a speech about having a dream.
Cat: I had a dream. Kids ate me.

Tori: Will you guys tell her she's being ridiculous?
André: Well, you did make a deal.
Cat: And you did say a person should keep her word.
Trina: Thank you, Tori's friends.

[Robbie enters Tori's house, beat up]
Tori: Robbie, what happened?
Robbie: I went to the playground, I got off my bike and I yelled, "Hey kids, who wants some free ice cream?", and then their mothers chased me into an alley and beat me with sticks.
Cat: Sticks?
[Jade laughs]
Robbie: One big mom stepped on my neck.
Jade: You gotta love big moms.

[Jade and Beck walk to Tori]
Jade: Ooh, you don't look happy.
Tori: I'm not.
Jade: Yay.
Beck: Trina giving you a hard time?
Tori: Yes. Do you know she sleep-sweats?
Jade: Sleep-sweats?
Tori: Yeah, she made me go into her room last night every two hours, with a sponge, lift her arms, and then, I had to take--
Trina: Tori! Hey, answer my phone!
Tori: I don't wanna.
Jade: You're her assistant, so do what she says.
Trina: Thank you, Jade! [reaches out to Jade]
Jade: Never touch me!

Trina: Ke$ha. Oh, Ke$ha, that was so great. You totally rocked our home.
Ke$ha: Thanks.
Trina: Wanna come upstairs and see my room?
Ke$ha: No.
Trina: Come on!

Trina: Hey, that little boy got locked out.
Jade: No, Trina, don't!
Tori: Trina, do not open that door! Get back here! Trina
Trina: Oh, what's wrong, little guy?
Boy: Those girls promised to kiss me and didn't.
Trina: Oh. Well, you could give me a little kiss…
Boy: (stares at Trina) Gross. (leaves)

Click here to see the photo gallery for Ice Cream for Ke$ha. 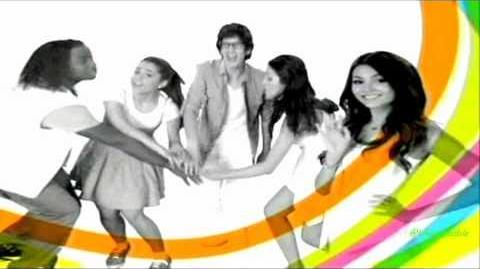