Victorious Wiki
Register
Don't have an account?
Sign In
Advertisement
in: Protected, Episodes, Episodes with Songs,
and 3 more

iParty with Victorious (also known as iParty in the UK[1]) is an iCarly and Victorious crossover. However, it is counted as an iCarly episode (part of its fourth season), and not a Victorious episode. It officially aired on June 11, 2011 with an extended version airing on August 27, 2011. The special aired on Nickelodeon UK on October 11, 2011.

Carly Shay is dating a boy named Steven who divides his time between his divorced parents who live in Seattle and Los Angeles. Meanwhile, Tori is also spending time with her new boyfriend who, unbeknownst to her, is the very same boy Carly is seeing. Elsewhere at Hollywood Arts, André is psyched because Kenan Thompson has offered to let him throw a small party in his awesome new house, but the party spirals out of control when Rex sends a mass tweet. Back in Seattle, Sam suspects that Steven is cheating on Carly after seeing a photo of him and Tori together and plans a trip to Los Angeles to catch him in the act at André's party. After Carly witnesses Steven giving Tori a charm bracelet identical to the one he gave her, even using the same delivery, she tells Tori about this. Wanting revenge, the two girls trick Steven into a closet, luring him with the promise of getting a 100 Day Kiss from Tori, and expose him, with Kenan Thompson's help, as a cheater on iCarly.

Having spent three hours as part of a sculpture, Spencer experiences back pain. At Gibby's suggestion, he uses Kenan's hot tub to soothe his wounds. After a dissapointing performance in portraying "true terror," Sikowitz tries to scare Tori and Beck so they can use that fear as actors. While he manages to scare Tori, he fails to scare Beck. Waiting out in the hot tub, Sikowitz manages to scare Spencer and even Jade but not Beck. The quartet spend the rest of the night in the jacuzzi, even as Sinjin falls in.

Having only granted permission by Kenan to have "a small party," André only invites the gang (plus Steven) only for Rex to tweet about the party with roughly 200 people attending, including a man in a Panda costume who wacks people on the butt with a tennis racket. As André tries to get rid of the Panda and the extra guests, Kenan arrives and reveals he's not mad, viewing a small party to be roughly 400-500 people, and that the Panda has been stalking him for years. As the two try and chase him down, they run across Tori and Carly, helping them get revenge on Steven, before chasing the Panda again.

Having earlier promised Lane that she would babysit for him, Trina brings the two children to the party, eventually pawning them off onto Cat who cannot speak as a result of a throat infection. When Trina has to leave however, Cat has lost the kids. Though intially worried, Trina's attention is grabbed by Kenan Thompson only for her to run into a furious Lane who found the kids sleeping by a trashcan. Trina slams the door in his face.

After Robbie destroys the sound system, Rex challenges all comers to a freestyle rap contest, winning until Sam dethrones him. At the end, both groups perform Leave It All To Shine. 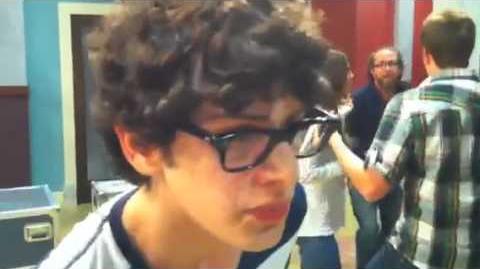 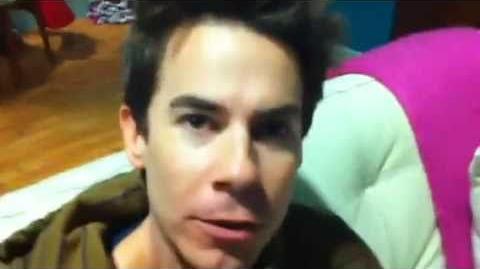 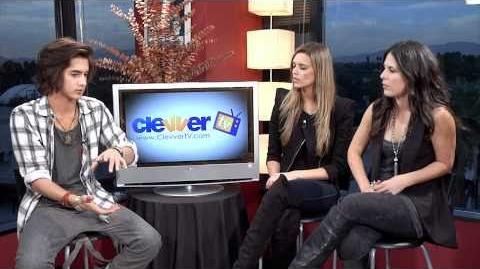 Click here to see the photo gallery for IParty with Victorious.

Reviews for the crossover were largely positive, with most enjoying Kenan Thompson guest starring, and the equal focus being given to the casts of both shows. A minority of reviews were more critical, namely regarding the facts that only Tori was given any real interaction with the iCarly trio or finding the plot to be somewhat similar to Beggin' on Your Knees.