How Trina Got In (also known as The Squid and the Coconut) is the 9th episode of season three of Victorious and the 43rd episode overall. It aired on May 5, 2012. The episode premiered to 2.414 million viewers, currently the series' third-lowest documented audience, 10,000 views higher than The Great Ping-Pong Scam.

Various bizarre stories are told about Trina and how she gained admission to Hollywood Arts. André says that it's that Trina did have talent back then, but then Sinjin accidentally hits Trina with a stage light, knocking the talent out of her. Jade says that when she did her terrible singing, the staff said no, but then Trina threw a gas bomb, making them pass out (except for her because she wore a gas mask), so Trina checks yes for each clipboard, followed by the staff not remembering this. Beck says that when Trina sang terribly, the staff said no, so Trina let up another deal, by putting up a fighting challenge for the staff, so if she wins, she would get in. Sikowitz says that when the rest of the staff ran to get Sinjin's face out from the soda machine, he watched Trina's audition himself, while drinking rotten coconut milk, which makes him hallucinate and see Trina doing talented and funny stuff, so then Sikowitz lets her in.

Tori and Robbie go to Nozu, but when it's time to pay the bill, Robbie realizes he forgot his wallet in his locker and is unable to pay the bill. Robbie and Tori try to call for someone to bring the money, but Robbie didn't want to buy a phone plan so he and Tori have to work at Nozu to pay a bill. They can't get out because Kwakoo, a very strict employee, won't let them leave. Tori and Robbie have to work to pay off the bill, and all three of them chop seventeen pounds of squid. When they try to leave, Robbie accidentally breaks a pile of dishes, so he has to stay and massage Kwakoo's feet, while Tori leaves without him.

Robbie: How's that tuna?
Tori: Mm! Good. The sushi here is amazing.
Robbie: I know, and this is the only place where they give me the training chopsticks.
Little Girl: Haha! Look at the baby's chopsticks!
Robbie: Jerks!
Tori: Dude! You can't call little girls jerks!
Little Girl: Hey girl, that's a stupid red jacket!
Other Little Girl: Ha!
Tori: Jerks!
Mrs. Lee: You want something else?
Robbie: Tori?
Tori: (looks at her watch) Um, no, we'd better get back to school.

Ms. Lee: What did she do for you?
Robbie: She helped me massage my grandmother's feet.
Ms. Lee: Why?!
Tori: Well, she was in a lot of pain.
Robbie: And the skin on her feet is so thick you have to use both hands to rub each foot.
Tori: I rubbed the left.
Mrs. Lee: Yeah, great story. Now I gotta go puke.

Robbie: Don't you have emergency money in your bra?
Tori: No!
Robbie: I thought girls did that!
Tori: Well, we don't!
Robbie: Cat keeps candy in hers! ​​​​

Tori: Oh dear!
Robbie: I thought you said no one our age says that anymore.
Tori: I'm bringing it back!

Jade: You guys know there's this germ called fecercillium that you can get from a spider crawling in your mouth while your sleeping? Your uvula swells up really big so you can't breathe and they have to cut a hole right here to drain the pus from your throat.
Andre: (Stares at Jade) I'll just eat this pudding cup later…

Andre: We gotta get to class.
Cat: No wait!
Jade: I'll tell you later.
Cat: But I'm curious now! Please tell me! Please tell me now!
(pulls candy out of her bra)
Cat: I'll give you a gummy bear! A jelly bean! A pinto bean! What are you into?!

Ms. Lee: I'm still waiting for my money!
Tori: How do you expect us to get it?
Ms. Lee: Why don't one of you whip out your fruit-shaped telephones and call someone to bring you the stupid money?!
Tori: Because we--Oh, okay. That's a good idea.
Mrs. Lee: Yeah.
Tori: Call Andre and tell him to bring us 30 bucks.
Robbie: (Nervously) Why don't you call him?
Tori: I left my phone in my backpack, which I didn't bring' cause you said that you were buying me lunch for massaging your Mamaw's funky feet! Now, call Andre.
Robbie: Okay, um, I'll just give him a ring-a-doo on my old pearphone here.

Tori: Hurry!
Tori: Oh, give me the phone!
(Robbie and Tori fight over his phone. Tori tickles Robbie's belly and grabs the phone)
Tori: Andre? It's me, Tori. We're stuck at Nozu. We need $30. Can you please bring it over? Hello? Andre? He's not on the phone. Does this phone even work?
Robbie: Well, it could.
Tori: You don't have phone service!?
Robbie: They want 45 bucks a month! I'm not paying that!
Tori: Then why do you carry this around?!
Robbie: I don't want people to think I don't have a phone! That'd be sad!
Tori: This is sad! This is so so sad!
Ms. Lee: So, when is my money gonna get here?
Tori: We don't have--
Ms. Lee: Well if you two don't have any money, then I guess you will have to work.
Robbie: Okay, take your shoes off. We'll rub your feet.
Tori: Ew.
Ms. Lee: Nobody's touching my feet!​​​​​​. You will do restaurant work.

Beck: Do you wanna know how Trina really got into Hollywood Arts?
Jade: Oh, yes! Tell us, oh great Beck who knows everything except how to keep a girlfriend happy.
Beck: You hate being happy.
Jade: Just tell the story!
Beck: Alright! ​​​​

Cat: (About Trina) But she's untalented.
Tori: Cat, that's mean…and true! How did she get in?

Tori: Look, you know who we are.
Ms. Lee: Yeah, you're the evil girl who left my daughter hanging from the ceiling.
Tori: That was a long time ago.
Ms. Lee: I still hold a grudge.

Ms. Lee: You order my food. You chew my food. You swallow my food. You know what comes next.
Robbie: I'm not comfortable with potty talk only if it's with my doctor.
Ms. Lee: No, igmo! You pay for my food!

Jade: (About Trina getting into Hollywood Arts) So 4 years ago, Trina did her audition, and it was like torture, but not the good kind.

Tori: We don't know how to chop squid.
Mrs. Lee: That's the squid, that's the chopper, use the chopper to chop the squid!
Robbie: Can you go over it again?
Mrs. Lee: NO!!!

Cat: I don't know, Trina is a little kooky in the head. A little nutty in the old noggin. (Pulls candy out of her bra and eats it) Some girls are like that you know.

Ms. Lee: Did you terrible children finish chopping the squid?
Tori: Yes, we chopped all 17 pounds of your nasty squid! All right? See? Now you have enough chopped squid to fill the Grand Canyon! And three more medium-sized canyons!
Ms. Lee: They have medium-sized canyons?

[promo only]
(Tori angrily chops the squid)
Mrs. Lee: Wow, you have issues.

(Robbie knocks over Kwakoo's plates)
Kwakoo: Oh no, my beautiful plates!
Ms. Lee: Now you two gotta work here all day and night until you pay for these broken dishes!
Tori: No!
Robbie: Yeah, no!
Tori: He's gotta work here!
Robbie: Yeah! What?!
Tori: You broke the dishes, I broke nothing!
Robbie: So your just gonna leave me here?!
Tori: Yepperty do da! 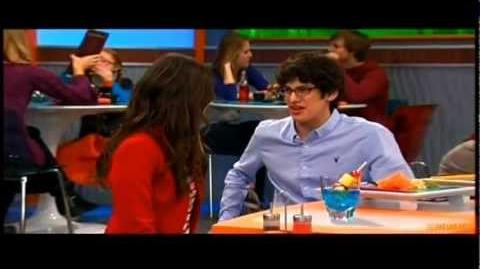 Click here to see the photo gallery for How Trina Got In.

Retrieved from "https://victorious.fandom.com/wiki/How_Trina_Got_In?oldid=848491"
Community content is available under CC-BY-SA unless otherwise noted.