Victorious Wiki
Register
Don't have an account?
Sign In
Advertisement
in: Females, Minor Characters, One Appearance Only,
and 3 more

Hayley Ferguson is the main antagonist in the episode Freak the Freak Out.

Hayley is first introduced flirting with Beck in Karaoke Dokie, instantly earning the ire of Jade. After she and Tara insulted Hollywood Arts High School, Jade and Cat challenged the two to a sing-off. Although the audience seemed to clearly prefer Cat and Jade in the competition, she and Tara always win the competitions since Hayley's dad is the owner of Karaoke Dokie.

After Jade and Cat convince Hayley and Tara to compete for the audience's votes against another person of their choosing, Tori's performance of "Freak the Freak Out", under the disguise of Louise Nordoff, easily beats them. Though Hayley meekly pointed out that the audience hadn't voted yet, the crowd quickly voted Tori as the winner. As a result of their loss, Hayley and Tara were forced to "babysit" Trina, who had recently gotten her wisdom teeth removed.

Hayley seems to be a fan of Ginger Fox as she and her friend, Tara, performed two songs by her: Number One and Hate Me Love Me. We can assume that she is spoiled by her father, as we see him handing her the award at his karaoke-club every night, despite her glaringly obvious lack of talent. She comes off as overly confident and in general acts very snobbish throughout the episode.

Hayley is rather smug and entitled, arrogantly dismissing Jade in her flirtations with Beck, and being confident that her own lackluster talents can triumph over any singer. She also considers Hollywood Arts to be a school for "wannabees" and was notably not intimidated of Jade in the slightest.

Despite all this, she, along with Tara, is, according to Cat, not as mean as Jade.

Hayley: You have insane hair.

Beck: Yeah... it used to be normal, but then one day it just... went insane! Sad story.

Cat: He has a girlfriend.

Hayley: I don't see her.

Jade: Turn around! Now you see her.

Hayley: I don't see much.

Hayley (to Cat and Jade): Aw! Look who's back! I thought I smelled failure

Hayley: And if we win?

Cat: You can make out with Jade's boyfriend!

Cat: She likes his hair!

Hayley: And if we lose?

Cat: You have to babysit a girl we know.

Jade (to Hayley): Anyone in this place could beat you morons.

Jade:  At least pick someone who has a chance.

Hayley: You said anyone in this place.

Jade: You know you might 'wanna-be' shutting your face there.

Tara (referring to Hayley's dad): He picked us because we sang the best! 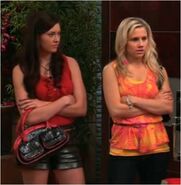 "We just want to change the gauze in your mouth!"