Forever Baby (also known as Move Your Body[1])is a Victorious song that appears in the episodes Freak the Freak Out, Rex Dies, The Wood and Tori Goes Platinum. It has been sung in both English and Spanish.

Robbie and Rex sang it together at Karaoke Dokie in the episode Freak the Freak Out.

Tori and Robbie sang it to Rex in Rex Dies.

Tori and Jade sang it to Festus after trashing his car in the episode The Wood. They started to sing it in English, but Festus then told them to sing it in Spanish.

Move your body right next to mine
Feel the beat and we are lost in time
I am yours and now you are mine
Forever baby
All the things we want to do
Never gonna let go of you!
Meant for me and I'm meant for you
Forever baby 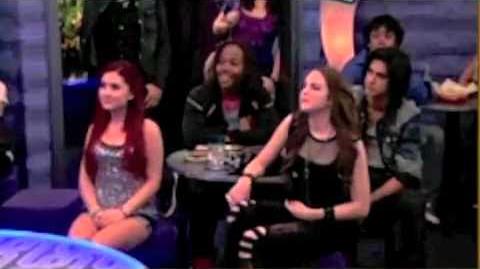