Daniel, also called "Danny", is an ex-boyfriend of Tori Vega and Cat Valentine who made his only appearance in Cat's New Boyfriend, though he was first alluded to on TheSlap. Not much is known about Daniel other than he seems to be a pretty relaxed, laid-back, and friendly guy. He goes to Sherwood High School, where Tori used to attend.

Relationships with Other Characters

Tori and Daniel used to go to school together and dated for a time, long enough for Tori to be comfortable in calling him "Danny", before she chose to end their relationship. The two did not remain close after their break up, as indicated by their awkwardness when interacting. They seem to have left a good deal unsaid as both Danny and Tori seemed to remain quite attracted and drawn to the other, both risking their relationships with Cat to kiss each other. Danny also appears a bit protective over Tori as he was willing to take all the blame for the kiss and affirmed to Cat that she is not the jealous type. (See: Toriel)

Cat and Daniel met sometime in Season 1 and began dating, though none of her friends appeared to know his name. The two were shown to have a close relationship as indicated by their frequent physical contact and they remained in a relationship until at least The Wood. Sometime between this episode and Sleepover at Sikowitz's, Daniel and Cat broke up. A Slap post mentioned that Daniel was angry about Cat forgetting their dinner plans for Valentine's Day, and indeed forgot that the two were dating, suggesting that he broke up with Cat due to how scatterbrained she was. (See: Caniel)

(Acquaintances) Outside of his ex-girlfriends, Beck and Jade are the first Hollywood Arts students that Daniel meets. Jade seemed to enjoy teasing Daniel about his past relationship with Tori, much to Beck's dismay. By contrast, Daniel reacted to Jade with confusion, often staring at her as if trying to make sense of her or why Beck was dating her. By the time of the Kick Back, he appears to have decided to tune out the couple. (See: Janiel for more about Jade and Daniel) 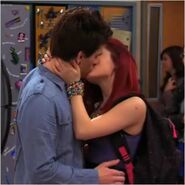 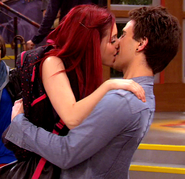