Damian is a student of Hollywood Arts. He has a goth/emo attitude and creeps out other characters because of his actions. He is portrayed by Felix Ryan.

Damian's only appearance was in A Film by Dale Squires, when he was sitting next to Tori. Apparently, not many things excite him. He appears to be some type of anarchist/loner or maybe even emo or goth. He seems to be an outcast at school, and it's unclear what talents he possesses.

Everyone seems to think that he's creepy, including Tori who moves away from him; and then in another scene the rest of the class moves away from him due to him saying, "that even excites me." During the seminar with Dale Squires, Damian randomly began caressing Tori's face and hair, to which she reacted with "Hey!" It's possible that he has a crush on Tori. 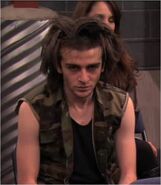 Retrieved from "https://victorious.fandom.com/wiki/Damian?oldid=593845"
Community content is available under CC-BY-SA unless otherwise noted.