Dale Squires is a popular Hollywood film director who visits Hollywood Arts, only appearing in A Film by Dale Squires. According to the Theater Department faculty at Hollywood Arts, he directed the film Butter Face, as well as a film that the students at Hollywood Arts performed, but has an unknown title. He was very selfish in the beginning of the episode, giving all the credit to himself even though Tori directed "his" film. He eventually gave credit to Tori and her friends who worked on the movie during his appearance on Up Late with Mack Murphy. André's overbearing and loud cousin, Kendra, beat him up, not knowing the plan for Squires' comeuppance was canceled. He is portrayed by Stephen Lunsford. 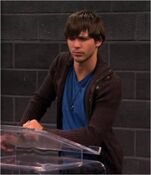 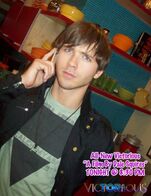 Dale with his cellphone.

Kendra about to beat up the defenseless Dale Squires.

Dale with his arms crossed.

Dale in Up Late With Mack Murphy.