Victorious Wiki
Register
Don't have an account?
Sign In
Advertisement
in: Episodes, Season 3 episodes, Episodes with guest stars,
and 2 more

Crazy Ponnie is the 12th episode of Season 3 of Victorious and the 46th episode overall. It aired on June 9, 2012. The episode premiered to 2.603 million viewers, the fourth lowest amount of viewers for a Victorious episode.

Trina has a head cold and has been keeping Tori awake with her endless sneezing, causing Tori to come to school looking tired and awful. After Trina sneezes on Tori in the hallway, Tori goes to the bathroom to wash her hands, and she hears someone crying in the nearby stall. Upon investigating, she discovers a girl sitting on the toilet, eating a sandwich and crying. The girl's name is Ponnie (played by guest star Jennette McCurdy). Tori befriends Ponnie and invites her to eat with her friends. But as Tori shows up at the lunch table with her friends André, Beck, Jade, Robbie, and Cat, Ponnie vanishes. When Tori tells all five of her friends about Ponnie, they don't believe her cause she wasn't there. They start teasing her about Ponnie's hair color being blonde. Later, Tori bumps into Ponnie again and Ponnie explains that she chickened out due to her shyness and also explains to Tori they have Sikowitz's class together but Tori and her friends have never noticed her. Her kindness causes Ponnie to develop a friendship with her when Ponnie touches Tori's belly button. Tori offers to walk to class with Ponnie together, but once Tori reaches the classroom, Ponnie vanishes again, and Tori's friends begin to question Tori's sanity, as she insists there is a Ponnie, and Tori's friends and Sikowitz insist there's no one named Ponnie currently at Hollywood Arts. She shows them the contents of Ponnie's backpack (as Tori offered to carry it for Ponnie) to reveal inside an ear of corn, a Klingon dictionary, and a doll made to look exactly like Tori who is evil. Tori runs out into the hallway to look for Ponnie, only to discover her locker has been vandalized, with it now saying "Make it Rot". Tori brings Sikowitz and her friends to her locker to prove that there is a Ponnie, and to Tori's horror, the locker has returned to normal, once again saying Make it Shine. Later at Tori's house, Beck, André, and Robbie try to calm Tori down, as she continues to persist there is a girl named Ponnie. The food her friends have ordered arrives at the door, and, to Tori's horror, the delivery woman is Ponnie in disguise. She shows this to her friends, but the delivery woman claims her name is Linda, and Beck, André, and Robbie believe Tori is crazy. To prove Ponnie's existence, Tori goes outside onto the porch along with the delivery woman, and the delivery woman reveals herself to be Ponnie after all. Ponnie kicks Tori in the shin and dumps the food onto her head telling her to get out of her school. Tori rushes back inside to tell her friends, and Beck, André, and Robbie believe Tori has lost her mind. She kicks them out of the house. That night, Tori talks to her mother about the Ponnie incident and they set a trap with Tori's dad's partner Gary in the police force. She comments that he is handsome, causing Tori to get embarrassed.

The next day Tori wanders into the hallway alone, attempting to lure Ponnie out. She begins to buy a drink from the vending machine, only for a hand to grab Tori through the slot. Ponnie emerges from the vending machine and reveals to Tori her name is really Fawn Liebowitz. Fawn is angry because Hollywood Arts kicked her out to make room for Tori, and Tori's locker used to be Fawn's locker. Tori calls for help, and police rush out to arrest Fawn. Sikowitz rushes over and recognizes Fawn, explaining to Tori that they kicked Fawn out because she was crazy, not to make room for Tori. Gary tells her mother and comments that she is very sweet, also embarrassing Tori. He explains that she kept strange things in her backpack, and called everyone Debbie for some reason. Fawn is led out of the school, and Tori is relieved that it is all over. But as Tori and Trina are driven home by one of the officers, the driving officer is revealed to be Ponnie in disguise as an officer, as an evil smile spreads across her face.

During an evening when Cat and Jade are hanging out together, Cat accidentally waxes Jade's eyebrows off when asked to do a makeover on them, so Jade runs around at school trying to get back at Cat. Jade starts by chasing Cat in the halls but is restrained by Beck and André several times, or when she is handcuffed to the table during lunch. She then ambushes Cat by the window in Sikowitz's classroom and proceeds to violently attack an unknowing Cat. At the end of the episode, when Cat falls asleep at the study hall, Jade finds her and removes all of Cat's hair as revenge for waxing off her eyebrows.

Trina has a fever and sneezes and coughs blowing her nose in a tissue, everywhere she goes.

Beck: Well, I'm not agreeing that you look tired and awful.

André: But why do you?

Tori: You wanna know why? Okay here's what's going on in my life right now. (Sinjin plays his saxophone) First, I'm supposed to- (to Sinjin) Do you have to play that now?

Cat: Well, Jade and I were hanging out last night and she asked me to do her eyebrows.

André: Do what to them?

Cat: Make them look neater and nicer! Girls do that; we groom each other like monkeys.

Tori: Ponnie?! Ponnie?! Ponnie?! Why was there corn in your backpack? Ponnie! (Tori then sees her locker in horror) M-Make it. Ro. Rot. Sikowitz! André! (Tori bring the whole gang to her locker, which Ponnie then changes back to Make It Shine) Come see it! It says Make It Rot! And I know Ponnie did it. Look! See, my locker says 'Make It Shine'. What? (Tori stunned) I'm not crazy! My Locker said 'Make It Rot' just a second ago! And Ponnie did it! I know Ponnie did it!

Rex: It is just me or Tori a lot hotter now that she's crazy?

André: What was that about?

Beck: (to Jade) Why are you so mad at Cat? (Jade turns around and Beck and André see her face without eyebrows; they look at her in shock)

Ponnie: Do you wanna eat lunch here with me?

Ponnie: There's room for two in the handicap stall.

Ponnie: My name is Ponnie with a P. Ponnie!

Ponnie: I know, I have a bad name! (starts crying)

Tori: No, you have a great name! I always wished my name was Pori!

Ponnie: I guess this is what it's like to have a friend.

Tori: Yeah but... you don't have to touch my belly button.

Jade: What color was her hair? Plonde?

André: Or Prunette? (everyone starts laughing, except for Tori)

Cat: (referring to Jade) Ah! She's right behind me. Please help me, she's going to kill me!

Sikowitz: What? Did you just say that someone was going to- ah, you kids work it out yourselves?

Sikowitz: (to Jade and Cat) You girls knock it off!

Cat: (replying to Jade) I don't wanna be gotten!

Tori: Who are you? What is your deal?

Ponnie: My name is Fawn Leibowitz.

Tori: Well, I don't even know you!

Ponnie: I used to go to school here. Until you showed up.

Ponnie: (points at Tori's locker) Your locker. Used to be my locker. Yeah, I got kicked out of Hollywood Arts so they could make room for you. Well, guess what Tori? I'm angry about it!

Ponnie: (holds up whistle ball) Looking for this?

Tori: How did you get my whistle ball?

Ponnie: The only thing you need to know is, I belong at this school, not you. (yelling) I WANT TO MAKE IT SHINE! IT'S MY TIME TO BE!

Tori: Well there's this weird girl at my school. Her name is Ponnie.
Holly: Bonnie?
Tori: PONNIE! Anyway she's, she's like been tormenting me and I'm just, I'm just so worried that what are you doing? (Tori sees her mother looking on her PearPhone XT)
Holly: I was checking my email.

Sikowitz: No, she didn't get expelled from Hollywood Arts to make room here for you.

Tori: Then why did she get kicked out?

Cat: I fell asleep during Study Hall. (Her friends react shocked and concerned.) Jade found me. (Holds out pieces of her hair)

Sikowitz: Oh, don't be sad little one! I think your hair looks great like that!

Cat: Of course YOU do!

Ponnie: (After dressing up as a fake Chinese delivery woman & spilling Chinese food all over Tori) Get out of my school!

Cat: Jade, I just wanna say, I really appreciate you having lunch with us. And... thank you André and Beck for handcuffing Jade to the table.
André: Sure.
Beck: No problem. (Jade roars angrily and attempts to attack Cat, who shrieks, scared.)

Cat: Yes, girls do that, we groom each other like monkeys!

Jade: My eyebrows are gone!
Cat: No, they're not, I told you, they're right here!

Robbie: And here's a nice song, to calm you down, and make you feel maybe a little bit less crazy.

Click here to see the photo gallery for Crazy Ponnie. 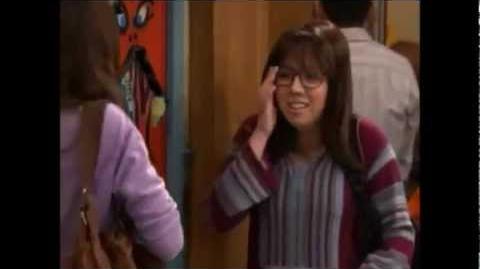