Charlotte Harris is André Harris's grandmother. She made eight appearances in the series and is portrayed by Marilyn Harris.

Charlotte was born and raised in Wisconsin sometime in the 1960s-70s.[1] Due to her behavior in the series, it is implied that she is mentally ill.

She made eight appearances in the series: Pilot, Wi-Fi in the Sky, Sleepover at Sikowitz's, iParty with Victorious, Driving Tori Crazy, Tori Fixes Beck and Jade, and The Bad Roommate. She was briefly mentioned in the episodes Survival of the Hottest, Jade Gets Crushed, Tori Goes Platinum, The Blonde Squad, Tori Fixes Beck and Jade, Cell Block and The Slap Fight. According to André, she lost her mind sometime before the series. The big showcase in the Pilot was the first time she left her house in six years due to her irrational fear of virtually everything, such as people, rabbis, bikinis, breakfast foods, vacuum cleaners, refrigerators, the seven year old next door, car horns, showers, and ceiling fans. She is also scared of clocks changing, mirrors, and web chats, as seen in her behavior in Wi-Fi in the Sky, when she punched André's laptop twice, causing the camera to shatter.

She appeared in "iParty with Victorious", attending André's party at Kenan Thompson's House. In The Blonde Squad, André borrowed her pet bird, Larry, for Beck's movie. In Tori Fixes Beck and Jade, she shows up at the Full Moon Jam. 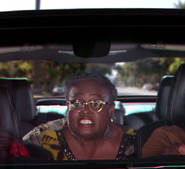