Victorious Wiki
Register
Don't have an account?
Sign In
Advertisement
in: Episodes, Season 4 episodes, Episodes without Trina, Episodes with a main character absence

Cell Block is the fifth episode of Season 4 and the 52nd episode overall of Victorious and aired on Saturday, November 24, 2012.

Sikowitz is having Jade, Robbie, and Cat rehearse a play, but he is driven crazy when Beck, Tori, and André constantly use their phones. Soon, even Jade, Robbie, and Cat use their phones too much which annoys Sikowitz even more. Sikowitz says that he would give them all A's if they are up to the challenge of going one week without using their phones or modern technology. The gang agrees to the bet. However, fate conspires to torture them as numerous things arise on the internet: Sinjin tells everyone to look at their phones and watch a video, which is so funny that he vomits in the trash barrel; Tori's mother uses hers with impunity in front of Cat and Tori, who are suffering severe withdrawal symptoms to the extent that they share a squeaky dog toy shaped like a phone and pretend it's real; Jade's nerves fray as she hears of an old lady dangling perilously from a stalled rollercoaster whose live footage she can't watch; Robbie and André are forced to lug around 'primitive technology' in place of their laptop and phone, namely a typewriter and a record player; and Beck gets mauled by Jessica Baxter since he didn't respond to her texts.

When Sikowitz produces the box containing their phones in class to test their resolve, Cat is the first to crack and makes a break for the box. In the ensuing struggle, she kicks Jade in the gut, whacks Beck across the face with the box, and it takes all five of her friends to pin her down. The boys complain that they didn't want the girls to ruin it for them, so Sikowitz changes the bet to be boys vs. girls, and whichever group uses their phones loses the bet, and the other team wins. They agree, and it proves to be even more difficult with the girls. Tori and Jade try to keep Cat, who is going slowly insane from her lack of texting, from getting to a phone, even tying her to a leash that she chews through. They then conspire to make the boys lose the bet by tricking them into using their phones: at school, Tori complains to Cat and Jade about a photo of her butt mole that Trina posted on TheSlap in front of each of the boys. Robbie nearly caves in until André and Beck stop him, telling him that the photo doesn't exist, and the three conspire to get back at the girls. Then a "lost girl", possibly a trick from the boys, tells Tori that she needs to call her mom. Suspicious, Jade tells Tori not to trust her, then slams the door on her, but as it turns out, the girl really was lost.

In class, the girls confront the boys about the trick, and they didn't admit it. Then, Robbie comes into class with a wacky costume and tells them to take a pic of him and post it on TheSlap.com. The girls say that it's a trick, but the boys don't admit. Sikowitz tells the group that they can get their phones only if they wanted to, and everyone does, but the girls turn theirs on and take pictures. Then Sikowitz says that the boys have won, the girls say they tricked them and say that the guys got their phones, but then they show that they didn't turn them on, and Sikowitz reveals that he had helped the guys and says that even if he is the instructor, he was a guy and they show off bragging, saying, "Boy power, boy power, boy power..." driving the girls crazy and making the girls complain. In the end, Cat watches the new Wacky Donkey video, which is so funny that she, like Sinjin, vomits into the phone box.

Robbie: We don't want to lose our A's just because girls are weak!

Cat: He may have a point.

Robbie: Just to be clear, I am on the boy's side?

Tori: We can do this! We don't even need our phones.

Sinjin: Hey, everyone! Look at your phones!

André: (Talking on the phone) Grandma, what is it?.... No! Nobody stole your bed, you're just in the kitchen!

André: (Talking on the phone) Take your pills.

Robbie: Oh, I just texted everyone a pic of me. (Points at Cat's phone) That's my sister's shirt I'm wearing!

Sikowitz: Then I challenge you all...

Jade: (To Tori) It's kind of sad, watching Cat go mentally insane... (watches Cat giggle and play with the dog toy phone) I always thought it would happen more gradually.

Jade: (To Tori) Why are you sitting on Cat?

Tori: If I let her up she might try to grab a real phone and I don't know if I can stop her by myself!

Cat: I don't think you can, I'm pretty scrappy.

Jade: So I'm here to assist you?

Tori: You're here to help all three of us. We're on the same team. And we've got to show the guys that we're stronger than them.

Jade: Dude, I am going insane over not having my phone, and so are you! And let's face it, Cat is a disaster!

Holly Vega: Oh, you girls are pathetic, when I was your age we didn't even have cell phones!

Tori: Yeah, but you had stuff that we don't have.

Sikowitz: You people are sick!

Robbie: I'm using this pocket to carry cheese and my allergy pills.

Beck: But won't the cheese melt in your pocket?

Robbie: No the cheese won't (pulls out melted cheese) Awhhh!

André: Well, I did and now I have a rash. It might be a Chinese rash.

[Talking about the typewriter] Robbie: I tried carrying the typewriter by putting it on my lap and I almost crushed my swimsuit area!

Cat: Please get off me, please!

Tori: I can't. Not 'till Jade gets here!

Cat: But I have to use the bathroom!

Tori: Do you really?

Tori: Are you lying?

Cat: I would do anything to text someone right now and I mean anything!

[Tori stares at her]

Lost girl: I just got lost; I took the wrong bus!

Jade: Well, you know what happens to little girls who take the wrong bus?

Jade: They get a face full of door!

Tori: Can't you believe the guys tried to trick us with a lost little girl?

Tori: Unless she was a lost little girl. What if she was?!

Click here to see the photo gallery for Cell Block. 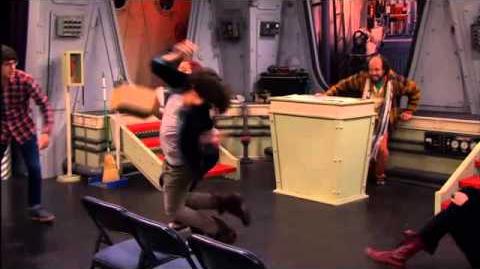 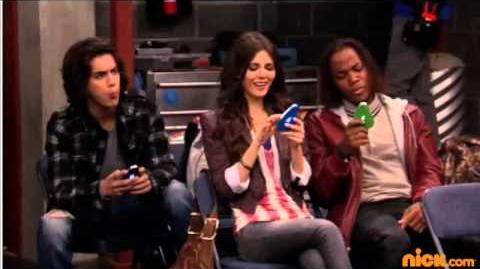