Start a Wiki
watch 01:51
The Loop (TV)
Do you like this video?
Catordré is the tri-pairing of Cat Valentine, André Harris, and Tori Vega (Ca/t, Tor/i, and An/dré). Cat and André are Tori's best friends, and they are often seen with her.

It consists of the individual pairings Cori, Tandré, and Candré. 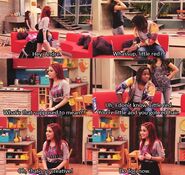 Singing I Want You Back

Hit it, muchacha!
Add a photo to this gallery

Retrieved from "https://victorious.fandom.com/wiki/Catordr%C3%A9?oldid=841257"
Community content is available under CC-BY-SA unless otherwise noted.