This is a video on TheSlap where Cat came over to Jade's house without Jade having invited her, but Cat got in anyway because Jade's mom opened the door for her.

Cat asked Jade to sing a song, because her followers wanted the two to sing a song. At first, Jade refuses, but after a short argument she gives in and calls a guy across the street, who used to be in jail, to play the guitar because she doesn't want to sing a cappella.

At the end of the video, Cat hugs Jade, but Jade says "NO!" and then pushes Cat away with a groan, implying that Jade doesn't like being hugged, at least not on camera.

They sang the theme song for Drake & Josh, Found a Way. 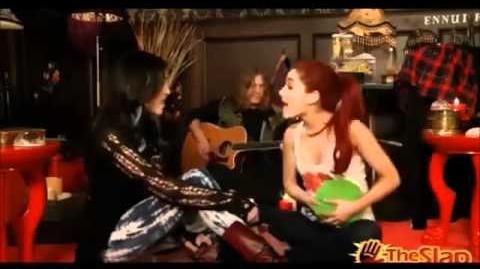 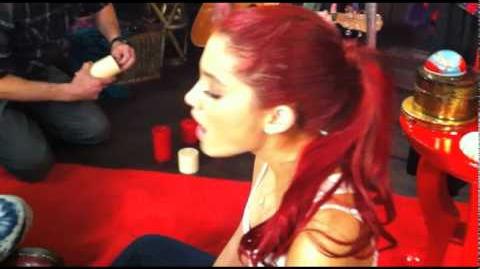 Victorious - On-Set FUN -
Behind the scenes
Add a photo to this gallery
Retrieved from "https://victorious.fandom.com/wiki/Cat_Crashes_Jade%27s_House?oldid=819852"
Community content is available under CC-BY-SA unless otherwise noted.