Cat is sad after reading on the internet that her favorite actress, Mona Patterson (from I Married My Mom), passed away. Tori, who is trying to complete her science project with Cat, reluctantly decides to take Cat to Mona Patterson's house so Cat can honor Mona by lighting her a candle, and they convince Jade, who is interested in being around the soul of the recently deceased Mona, to drive them.

After driving Cat's brother's convertible towards San Diego through a horrible rainstorm with a broken top, they stop at a gas station only to find a bag of fake feet in the trunk of the car, for which Cat admits her brother is "pretty weird." They drive away quickly after being confronted by a clown who wants a ride. After the treacherous journey, they finally arrive at Mona's home, where Cat leaves a cinnamon bun-scented candle by Mona's doorstep and honors her with a brief speech. Suddenly, the door opens, and they discover that Mona did not die. Cat had been confused by the headline "Mona Patterson joins The Dead", which was a new TV show. Mona proceeds to spray the girls with a squirt gun to send them off her property.

Tori and Cat complete their science project with a hamster wheel powered robot. While Cat is at Tori's house, they see a news report about a fire at Mona Patterson's house. Although the reporters don't know who caused it, they know it was caused by Cat's candle and Mona had said something about a "cat with red fur, leading Tori to shush Cat and then quickly change the channel.

Beck finds out that Trina has been spreading a rumor around school that he asked her out to make other guys interested in her. Beck decides to get back at her by pretending to be interested in her and asking to go to Trina's house to have a chicken that night. She attempts to bake a large turkey, which she initially thought was a chicken, but she fails as her dad points out she did not turn the oven on, so she shoves it into the microwave. The doorbell rings and Trina opens the door expecting Beck, but André shows up instead declaring his love for her, to her confusion. When Beck does come, he and André start arguing over Trina, who tries to get them to stop. Soon Robbie arrives with flowers proclaiming his love for Trina. After the boys get into a fight, Trina leaves the room to tell her Dad what's happening, only to find when she returned that the boys were playing with puppets on the couch. Beck then asks Trina if she's learned her lesson, and they all dance in a circle around her before they run out of the house, revealing that Beck asking her out and the rest of the events that happened to Trina had been just an act to teach her a lesson for lying. 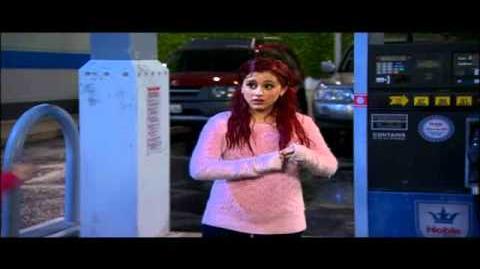 Tori: Why are you all sad?
Cat: How do you know I'm sad?
Tori: Well, you're dressed in sad colors, and you were playing a sad song. Oh, and you're wearing a button that says, "I'm sad, ask me why!"

Cat: Now no one even remembers Mona Patterson or cares that she's gone.
Tori: I'm sure she has lots of fans who care.
Cat: No! On my way to school, I stopped by her store on Hollywood Boulevard, and there weren't any flowers or anything! Just a weird man with some vomit on his pants.
Tori: Yeah, um, listen--
Cat: I gave him a Tidy Wipe, but he ate it.

Tori: What if after school, we drive to her house, and you maybe light a candle and leave it by her doorstep, to honor her memory?
Cat: Can it be a scented candle?
Tori: Sure.
Cat: Cause I have one that smells like cinnamon buns.
Tori: Did Mona Patterson like cinnamon buns?
Cat: I don't know, we weren't friends!

Cat: So you'll drive?
Tori: No, I didn't pass my driver's test.
Cat: Why not?
Tori: I didn't see the old lady in the wheelchair. [Cat gasps] I signaled before I hit her!

Trina: I put this stupid chicken in the oven three hours ago, and it's still not cooked!
Mr. Vega: Okay, um, couple of things. You didn't turn the oven on, this is a turkey, and yeah, it's frozen.
Trina: Well, what am I supposed to feed Beck?
Mr. Vega: Does he like turkey-sicles?
Trina: Dad!
Mr. Vega Sorry I can't hear you over the music even though this isn't playing yet.

[After it starts raining]
Jade: Uh ladies, I hate to rain on your parade, but it's raining on your parade.
[Cat opens an umbrella, which goes flying out of the car]

Tori: Cat, I think I brought an umbrella, do you see it anywhere?
Cat: No, not really...

Jade: Oh my God!
. Tori: [Pulls out a bag of feet] What is this?!
Cat: Don't worry, they're not real feet.
Jade: Well, why does your brother have a bag of fake feet in the trunk of his car?!
Cat: I'm not gonna lie. My brother's pretty weird.

Beck: Dude, go.
André: Don't tell me what to do, you-you Canadian!
Beck: OH!!!
Trina: Ok now boys, this isn't very ni--
Beck: [To André] I always had a feeling you were anti-Canadian.
André: So, whatcha gonna do aboot it, eh? Eh? You gonna hit me with a hockey bat, eh? Eh?!

Cat: Be gone, ghost of Mona Patterson! Go to the light!
Jade: Cat, I'm almost sure she's not dead.
Cat: [About to touch Mona to see if she isn't a ghost]
Mona: [Slaps her hand away] Don't poke that!

Beck: Trina made chicken for me!
André: Don't you listen to her? She made a turkey! Why would you wanna date a Canadian that doesn't know one food bird from another?

[Riding in a topless convertible in the rain]
Tori: We've gotta pull over!
Jade: I can't pullover on this freeway there's no way to stop!
Cat: I'm getting wet!

Tori: How do we put up the top?
Jade: Cat, where's the switch to put the top up?
Cat: [Points at the switch] Right there! Under the radio!
[Tori turns the switch, but it doesn't work]
Tori: It's not working!
Cat: I know, it's broken!

Tori: Hey Jade. I thought you were going to breathe in the fumes of Mona Patterson's soul.
Jade: Well it's hard to enjoy when my pants are soggy.