Candreck is the tri-pairing between Cat, André, and Beck (C/at, Andr/é, and B/eck). They are all close friends. If the three did date each other, André and Beck could both be the "man" in the relationship because of Cat's girly-girl personality while still being able to have that vulnerability with each other. Cat would be able to have the attention of two men with Beck's cool and collected personality complementing André's emotional one.

For the individual pairings, see Candré, Bat, and Bendré, respectively. 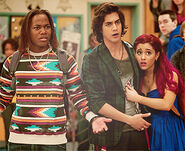