Buster is the dog from the episode Opposite Date. He is Beck's Aunt's dog. Beck's aunt needed Beck to take Buster to the pet hospital, Pet Mergency, in Sherman Oaks. Fortunately his medical emergency is not too bad because his nurse, Maureen, says that he "should be as good as new in about a week" and all he needs is some ointment. 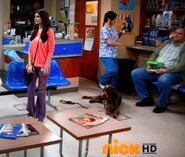 Add a photo to this gallery
Retrieved from "https://victorious.fandom.com/wiki/Buster?oldid=725248"
Community content is available under CC-BY-SA unless otherwise noted.