This page is about the episode. You may be looking for the game show of the same name.

Brain Squeezers is the 10th episode of Season 4 of Victorious and the 57th overall.

Tori is chosen to be a team captain on the game show Brain Squeezers. She tells everybody about it and explains that the winning team will win $10,000 and they all get to split it. Soon, all her friends and people she knows constantly bug her to try to bribe her to pick them to be on their team. Robbie tries and cleans Tori's locker and gives her $20, but when Tori says she's not promising to put him on her team, he takes the $20 and shoves dirt on her locker. Then, Cat tries to convince Tori that she will be smart when she shows her a new PearPad app she downloaded called Test Easy that will give her answers to things she will need to know. Tori realizes that Beck is playing cool just to get her to ask him to be on her team, which he starts to deny, but ends up begging to be on the team.

Later at the house, Trina comes in and suggests different "perfect" teams that she could pick. They get into an argument, which leads to Tori putting her pie in Trina's face and Trina biting Tori's ear, before Trina leaves and goes upstairs. Jade then shows up and fakes a sob story to get Tori to choose her to be on the team, but Tori sees through this, and they end up getting into a fight. When Trina comes back down, she is upset that Jade's there because she's not part of her idea of a "perfect" team. Tori, fed up with them, gets out her phone and tweets her team. Much to Trina and Jade's disapproval, she chooses André, Beck, and Robbie.

The next day, Tori arrives at the studio with her team to find that Jade has checked in, saying she was Tori, minutes before. They all get into an argument about whether or not Jade is who she says she is, and one of the people who runs the backstage crew tries to straighten things out. After Jade shows him a fake school ID proving she's Tori Vega, which André and Beck thinks looks impressively real, and Tori has no identification of her own to give, he gives Robbie, Beck, and André to Jade as the Yellow Team. When Tori complains, he lets her captain the Blue Team with Trina, Cat, and Sinjin as her teammates.

When they play, it proves to be a very difficult game. First, Robbie gets a question wrong which gives Tori's team, the blue team, 100 points. When he gets doinked, he gets sprayed with pus. Trina soon gets picked to answer a question, and, she gets doinked with nuts and bolts. Then when Jade picks Beck to answer a question, he decides to pass and then doesn't even answer, then gets a doink. He gets The Gut Whack, in which they use a bowling ball with a stick to hit him in the groin. Then, when they pick Math as a topic, Tori chooses Cat. When Cat gets the wrong answer to the question, she gets a double-doink, two red punching gloves punch her in the face.

Soon, Jade gets asked a question about her favorite movie, The Scissoring, then when she doesn't know the answer, the host says that she is a victim of "A-Salt and battery," then they spill salt all over her. However, the tiny batteries hit

André. Then soon, André tells the host that Jade got the question wrong, then the batteries go all over Jade. Soon, a car battery hits Jade as a sarcastic suggestion from Beck. Sinjin answers a question and then he gets doinked by accident, he gets hit with a toilet on his head.

After a break, everyone, save for Tori, much to Jade's rage, has been doinked. When Cat is asked a geography question, she pronounces "Hawaii" as "Hawa-eye-eye", but still gets it right. When they tell Tori to grab the cash, however, a buff and strong man lies on top of her and she must get the cash within the next 10 seconds. Unable to even get out from under him, the adventure ends with no one having gotten the money.[3]

Game Show Host: In the movie The Scissoring...,
Jade: Yes!? Yes!?
Game Show Host: How many times the is word scissors spoken?
Jade: I don't know! Who would know that?

Cat: Ooh, I love this song too! I wonder if the person I'm on hold with is my one true love!
Robbie: Well, you know what they say about-
Cat: (Interrupting him) Shut up!

Sinjin: I know all about bugs.
Trina: Yeah, 'cause you are one.
Sinjin: I wish.

Cat: I've never been doinked before. I am not ready.
Game Show Host: What is the only number that is even and odd?
Cat: Ninety-four-three.
Cat: I am a girl. Can't you just skip my doink?

Game Show Host: Any contagious diseases?
Sinjin: Contagious? (thinks for a moment) No!

André: What was that?!
Game Show Host: That was a load of batteries.
André: I know what they were! But why did you drop it on me?! She got the answer wrong!
Game Show Host: Good point, more batteries!
Jade: Wha-? (the batteries fall on her head) Gyaaaaow!!!
Robbie: Okay, that's borderline dangerous.
Beck: Yeah, why don't you just drop a car battery on her head?!
Game Show Producer: Car battery!
Jade: (After she gets hit on the head with the battery) Ow!
Tori: I'm Tori Vega!
Jade: I'm Tori Vega.
Cat: I'm Tori Vega!
(Everyone stares at Cat)
Cat: Aha! I'm not Tori Vega.

Tori: I thought it was just a game show. I'm so sorry, you guys.
Jade: No, we're sorry because you didn't get doinked yet!

(After Sinjin gets doinked while answering a question)

Tori: He didn't even answer the question!
Cat: Why did you drop a toilet on his head?
TV show host: Not sure. Sometimes things go wrong. But why don't we give each team 100 points and pretend this never happened?!

Reception for this episode was largely negative, most finding the plot to be nonsensical, stakeless, and cruel especially the ending, despite some amusement at the dark comedy.

Click here to see the photo gallery for Brain Squeezers. 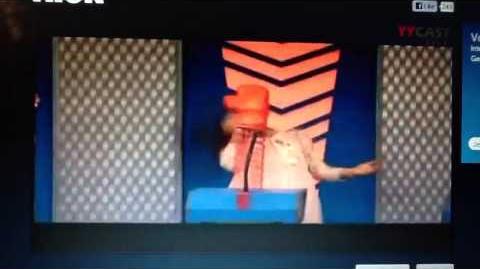 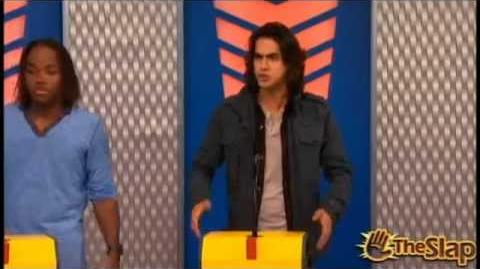 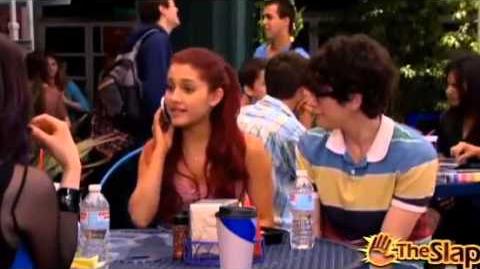