This page is about the episode. You may be looking for the song of the same name.

Beggin' On Your Knees was the season premiere of Season 2 and the 21st episode overall of Victorious. It aired on April 5, 2011 to 6.1 million viewers, the highest documented audience of an episode in the series.

The episode starts out in chorus class. The teacher explains that everyone must perform a song at the Full Moon Jam, and it can be a duet or a solo. Many people ask Tori to perform with them, but she makes it clear that she's singing a solo. Shortly after, a handsome classmate named Ryder Daniels ask Tori to go out with him, which makes Tori extremely excited. Trina and Jade try to warn her that Ryder has a bad reputation, Trina even warning her that a "friend" of hers went out with Ryder last year only to get dumped by him without warning. Tori doesn't believe them, and invites Ryder to her house for sushi, with Robbie spying on them during the date in an attempt to find out how to get girls to date him.

While Ryder leaves the room for a minute to go to the bathroom, Trina convinces Tori to look through his text messages and discover more about his reputation. When Ryder finds out, he leaves, angry with her. However, the next day, Tori begs him to give her another chance. He agrees, and convinces her to do a duet with him by telling her how nervous he gets when singing alone.

Meanwhile, Robbie dresses up like Ryder (and pierces his ear) to try to attract girls. He nearly succeeds until the girl he's talking to insists she wouldn't date him because he reminds her too much of Ryder; whom she dated only to get dumped when he got a good grade on their joint project together. She also says she should've known as he dates many girls only to get good grades from them.

Realizing that Tori is now one of Ryder's victims and not wanting her to go through the same thing like the previous girls he went out with, Robbie tells the rest of the gang, who then check it out with some of the girls he had previously dated to confirm it. After being confirm of this information, they notify Tori that she's being used by Ryder, which not only left her stunned that she been played with but also regrets for not listening to Jade and Trina when they warn her about him. Seeking revenge, she asks André to help her write him a song so Ryder will fail and she can expose him for being a liar. She performs Beggin' on Your Knees and leaves Ryder humiliated in front of the whole school. After the song finishes, Ryder walks off the stage with the quartet singing to him "You just got burned." Tori waves goodbye to Ryder and takes a bow on stage after performing.

Cat begins getting calls from North Star, an emergency help line for people that have been in car accidents. Believing that she is really helping, she continues to take the calls, but never really gets the paramedics to come to anyone in need.

Beggin' on Your Knees by Tori Vega

Okay by Backhouse Mike (sung by Tori and Ryder Daniels)

Anthony: Hold up, hold up. Someone was off key.

Robbie: My singing wasn't off!

Rex: Man, your whole life is off.

Ryder: Uh.. Tori wasn't off. (to Tori) You were perfect. Really nice tone.

Tori: (to Robbie) Hah! Handsome boy thinks I was perfect!

Robbie: I'll hide in that bush on your patio.

Robbie: You never have!

Beck: Okay, that's a time out!

Beck: Go sit on the steps!

André: ALL RIGHT! I guess I'll just have to celebrate my 97-year-old great-grandpa's birthday with him next year—POSSIBLY!

Ryder: Were you reading my text messages?

Tori: No. *phone beeps* (Tori looks down at screen and looks up)

Tori: You just hate the idea of anything good to happen to me.

Jade: That could not be more true!

Robbie: (upset) So why are YOU happy?

Tori: Because Ryder Daniels asked me out!

Rex: Oooooh, he's hot! (everyone looks at him)  Stare all you want, I'm secure.

Jade: I'm just sayin', any guy that hot and that perfect has to be hiding something.

André: So, I guess you think Beck is hiding something.

Beck: What...What was I hiding?

Jade (angrily) That you were born in Canada! (walking away)

Beck: (walking after her) It wasn't a secret!

Quartet: (singing) Hey, hey, Tori Vega, would you be our very special-

Trina: (stretches her legs and rubs her butt on the table)

Tori: You know, we eat on that table.

Trina: (while rubbing) Sorry. My butt's gotta breathe. (walks across room while stretching) And why make sushi?

Trina: He dates lots of girls. You know my friend Lindsey? (stretches towards piano)

Robbie: (Stands up from behind a bush) Yes?

Robbie: Hey, at least I didn't snoop through Ryder's phone.

Quartet: (singing) You just got burned!

Robbie: You said for sure that Ryder's ear is pierced!
Rex: Heheh, yeah I was kidding.

[To Tori]
Robbie: Is there a reason why girls don't wanna go out with me?
Tori: You mean one reason that stands out over all the other reasons? 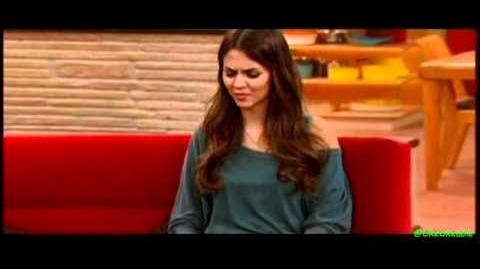 Beggin' On Your Knees Promo 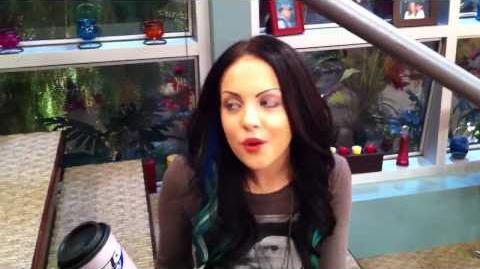 On The Victorious Set - Just Filmed!
Behind the scene
Add a photo to this gallery

Click here to see the photo gallery for Beggin' On Your Knees.

Retrieved from "https://victorious.fandom.com/wiki/Beggin%27_on_Your_Knees_(episode)?oldid=845133"
Community content is available under CC-BY-SA unless otherwise noted.