Beck and Jade's Relationship Advice are video segments on TheSlap about relationship advice by Beck and Jade; however, they never do get the chance to actually give relationship advice as shown in the videos so far. Usually, when they start their videos they introduce themselves, but then they start to argue, often due to Jade's temper. They eventually solve their problems, but something always stops them from actually answering any relationship questions that TheSlap members sent in. There were only 2 episodes in total, both of which were written by Dan Schneider.[1]

Jade: (Referring to the camera) Don't turn on that. I got something in my teeth.

Beck: I already turned it on.

Jade: You turned it on while i'm getting something out of my teeth?

Beck: I didn't know that you were-

Beck: You wanna start over? Cause i can just press the button-

Jade: It's been longer than 2 years but it doesn't matter just keep going.

Beck: I thought we officially started dating on- 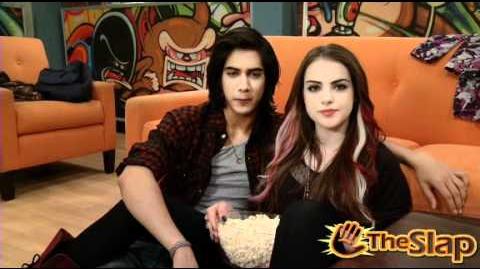 Beck: What you doin'?

Jade: I just made popcorn.

Beck: It was a joke.

Jade: I'm his girlfriend which makes him ridiculously lucky.

Jade: Oh you're not lucky to have me as your girlfriend?

Beck: I just said so lucky.

Jade: You said it sarcasticly.

Beck: You say everything sarcasticly.