Victorious Wiki
Register
Don't have an account?
Sign In
Advertisement
in: Protected, Episodes, Episodes about Cat,
and 5 more

Beck Falls for Tori is the 2nd episode of Season 2 of Victorious and the 22nd episode overall. It aired on April 16, 2011.

Sikowitz gets Tori an audition for the best friend of the lead girl in a movie. But, André, Beck, Jade, Robbie, and Cat have problems with her resume. So they advise her to "exaggerate" while Tori calls it lying. She is not chosen for the role of the best friend since she "looks too much like the star", but because of the lies on her resume, she is hired as a stunt double instead. She tells Sikowitz she wants to quit, but she finds out she will get "blackballed" in Hollywood if she quits. She tells the others that her stunt is to simply fall off a chair, and in response, Jade kicks Tori off of her chair. On the set, she finds out she has to fall off the chair, through the railing, and fall down 40 feet onto the air sack. When the director's son gets bitten by monkeys and the director has to leave early, Tori is saved from doing the stunt. André says she doesn't need to do the stunt, but Tori doesn't want to get blackballed. So, André tells Tori to stay calm since all of them will go there to calm her down. Tori gets a text that Beck is there, but lies that she has to pee with an app called "Pee Minder." Beck does the stunt for her, wearing a nearly identical dress that Cat designed and pretending to be Tori. Tori later feels mad at herself for chickening out and convinces Sikowitz to get her back onto the movie set to do the fall for real. However, once she is up there, she hesitates to actually do it, so Jade pushes Tori off of the platform and she lands safely on the air sack.

Meanwhile, Cat loves her new Costume Designer class and is making many different outfits like Little Bo Peep, Superhero, Sikowitz, and a secret agent. She also has the talent to find out people's exact measurements.

Fan reaction to the episode was mostly positive, but some viewers found it to be pointless.

It premiered to 3.946 million viewers.

Sikowitz: And I've never done a standing backflip, but watch this. (attempts backflip) Yeeeeeeah! (lands on his face)
Tori: Are you okay?!
Sikowitz: No, not really.

Rex: Hey Jade, that's a nice new sweater!
Jade: Thanks, its made out of puppet hair!
Rex: Dang, woman!

Robbie: Rex! You promised me these were boy's jeans!
Rex: Heheheh! You've been Rex-ed!

Rex: What did you say, girl-pants?

Cat: My brother got shot by a clown.
André: Why?
Cat: Cause he kept on poking him and saying 'What are you gonna do about it clown? Huh?' It happened on a bus.

Jade: Cat (whips out a coloring book and a box of crayons), color the tiger.
Cat: Yay, crayons!

Jade: You put bike riding as a special skill, who doesn't know how to ride a bike?
Rex: Take a guess.
Robbie: Can you ever keep a secret?

Cat: Did I mention that the clown was my cousin Jessie? Jade: Color the pretty tiger!

Cat: LOOK! I made my tiger purple! That doesn't happen in nature!

Tori: So what special skills should I add?
André: Gymnastics.
Beck: Martial Arts.
Robbie: Sky-diving.
Jade: Flirtatious hair-flipping.
Tori: Okay, I do not flip my hair flirtatiously.
Jade: Oh, ho, ho, really? This doesn't look familiar? (in Southern accent while flicking her hair) Why, hello boys! My name is Tori Vega. Buy me some licorice and I'll give you a kiss!

Tori: Thank you monkeys!!!
Set assistant: We have names!

Set Assistant: Just don't miss the sack like the other stunt double.
Set Director: Will someone get that dry blood off the floor!

André: I don't think you should do the stunt.
Tori: I have to. I'll get blackballed in Hollywood if I back out. I don't wanna get blackballed! Robbie: Then just do it.
Tori: And what if I end up in the hospital?
Jade: (in Southern accent) Well, maybe you'll meet a handsome young doctor, get married and share a soda pop!
Tori: I don't talk like a movie star from the 1940s!

Rex: Wait, WHO got bit by monkeys?
Tori: The director's kid.
Rex: Did he TAUNT the monkeys?

Tori: That's a great costume. Maybe you can dress me for my funeral.
Cat: I could so do that.

André: Hey now there's not gonna be a funeral.
Cat: Aw...
André: No worries you're gonna land softly right onto that air sac. Unless you miss it! Heh!
[Tori stares at him]
André: I don't think you'll miss it... 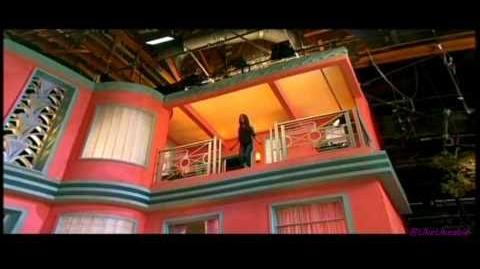 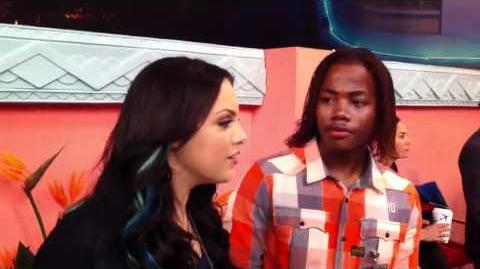 Click here to see the photo gallery for Beck Falls for Tori.