Babbie is the tri-pairing between Beck, Cat, and Robbie (B/eck, Ca/t, Ro/bbie). All three of them are very close. Robbie and Beck are really good friends, and Cat is really good friends with both of them. Since Beck is the aloof and collected "cool guy" and Robbie is the sweet but awkward tech nerd, Cat could have the best of both worlds if she chose to date both. Beck and Robbie could each have a relationship with a kind, attractive girl they are good friends with and a relationship with a guy they are already close to. Robbie would get to be the "man" with Cat and be protected by the more dominant Beck, and Beck could have a girlfriend who's more experienced with dating and a boyfriend who he can take it slow with and teach things to.

It is also possible that due to Robbie and Beck being friends, Robbie has told Beck about liking Cat and it may be one of the many reasons why Beck respects Cat and it is unlikely he will date her, out of respect for Robbie.

For the individual pairings, see Cabbie, Bat, and Reck, respectively. 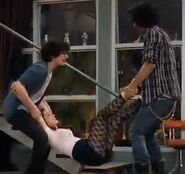