Victorious Wiki
Register
Don't have an account?
Sign In
Advertisement
in: Episodes, Episodes with Songs, Episodes about Tori, Season 2 episodes

A Christmas Tori is the first ever and only Victorious holiday special. The episode aired on December 3, 2011. It is the 13th episode of Season 2 and the 33rd episode overall to 4.4 million viewers.

The episode starts in the classroom; the Hollywood Arts students are celebrating the holidays, and the school is decorated for the occasion. Robbie is dressed as Santa Claus, Cat is enthusiastic about everything and Jade is just grouchy, leading everyone to call her a "Christmas grunch". André and Tori enter, and André is freaking out because of a bad grade he got on a Christmas song he wrote for Anthony's class, his first ever D. Beck keeps falling asleep in class because a noisy cricket in his RV has been preventing him from getting any sleep. Before anyone can continue, Sinjin comes in to tell Sikowitz his Secret Santa assignment. Sikowitz is upset to find out that he will have to give a gift to Sinjin's sister, Courtney Van Cleef, who he thinks is a weirdo. He asks to trade with someone, however the gang says they didn't sign up because they shouldn't have to give gifts to "random people they don't care about." Sikowitz, believing that they need to get in the holiday spirit, tells them that they will all be required to participate. Everyone must get creative and special gifts for each other, and the one who gives the worst present will be forced to go door-to-door Christmas Yodeling with Sikowitz on Christmas Eve.

As Cat distributes her brother's Christmas beef around school, Jade complains to Sikowitz about being assigned as Tori's Secret Santa, and requests to switch with someone else to no avail. Beck meanwhile is reduced to constantly drinking many cups of coffee in order to keep himself awake. However, he musters enough energy to deliver Robbie's Secret Santa gift - he brings Robbie's old bully, Christy Vicaris, to school because Robbie has been talking about wanting to get even with her. However, Robbie is too distracted at how hot she looks and the two end up going on a coffee date. While attempting to convince Anthony to give him a better grade, André, as Beck's Secret Santa, catches him the cricket that has been keeping him up at night in his RV, but Beck gives it to Sikowitz, who gives it to Courtney.

Tori is André's secret Santa, but has trouble coming with a good gift to give to him - her idea is a miniature ceramic guitar, but Trina warns her that this gift is useless to André. Tori ultimately decides against it after seeing Robbie's gift to Cat: a cotton candy cart and a man that follows her around for a week, which she loves and thanks him by giving him a big hug and a kiss on the cheek.

Cat is Jade's Secret Santa and amazes her by buying her a new pair of scissors from The Scissoring, Jade's favorite movie. Tori witnesses this and proceeds to ask them for help on ideas for André's gift. While Jade is at first dismissive, she later shows up at Tori's house and reveals herself as Tori's Secret Santa. She reveals that her "gift" to Tori is an idea for a good gift for André, though forces her to beg her for it to make her feel good about herself. Ultimately at school, Tori, along with Cat and Jade, gathers Anthony and many of the students in the hall, where the three perform their own take on André's Christmas song (It's Not Christmas Without You) to try to show Anthony that it's worth a better grade. Eventually, André joins in and sings with them as well. Anthony concedes and gives André an A after hearing the song.

In the end, Sikowitz concedes that everyone gave wonderfully creative presents to each other, and that he was the one who gave the worst one, so he goes Christmas Yodeling with a group of strangers on Christmas Eve.

Trina gets a giant Christmas tree for the Vega house, which is so big that she has to climb it to get the star on. She asks Robbie for help decorating it, promising him pizza and a hug afterwards, even though she claims to Tori that they are not friends. It is subtly implied she is craving companionship for the holidays with Tori too focused on André's gift and both their parents out of town, and she and Robbie seem to enjoy each other's company with their mutual knowledge of Christmas decorations.

Secret Santa is program that Sikowitz organized in this episode. Every student is chosen to give other people a gift without them knowing. Secret Santa has started outside of Hollywood Arts. In this wiki, different users start their own Secret Santa program for other users.

Cat: I do love short pants.
Jade: Yeah. Guess what I love?
Cat: What?
Jade: Slapping perky red-heads.
Cat: Hahahaha... [Plays with her hair and is shocked and scared when she realizes Jade is referring to her]

Robbie: Ho ho ho! And... jingle bells. [André reaches for Robbie's chair]
Tori: No no, André, don't do it, don't- [He knocks the chair over and Robbie falls to the floor] Oh, you did it.
Jade: I bet that jingled his bells.

Sikowitz: [sarcastically] Oh, sorry Beck! Certainly wouldn't want to keep you awake during my class!
Beck: Thanks, you're the best. [goes back to sleep]

Sikowitz: Why Becky so sleepy?

Tori: Hey Trina, Trina!
Trina: What?
Tori: You wanna see what I got André for his secret Santa gift?
Trina: No.
Tori: Look! It's a little ceramic guitar. I made it at Color-Me-Pot!
Trina: I thought Sikowitz said that your secret Santa gifts have to be really special and creative.
Tori: He did.
Trina: Well, that's ugly. And useless.
Tori: No, it's cute. And look; you can pretend to play it, like... [starts pretend-playing the guitar, and sings in a jazzy accent] Tori gave me this Christmas present, and it's a tiny guita-a-a-ar!
Trina: [Slowly backs away]
Tori: Why are you walking away?
Trina: [starts walking away] 'Cause I'm embarrassed for you.
Tori: [with jazzy accent] That was me-ea-an!

Robbie: [excited] You bought me a girl?!

Jade: [Opening the present Cat gave her] Oh my God, Cat you did not!
Cat: [squeals]
Beck: [confused] Scissors?
Jade: [snapping] They're special scissors!
Beck: [mutters] Okay.
Cat: They're from a real movie!
Jade: I can not believe you got me these!
Tori: What movie were they used in?
Jade: The Scissoring.
Tori: Wait, that one about the girl who comes back from the dead and uses a pair of scissors on her two best friends?
Beck: Yep.
Jade: [Twirling her scissors around her finger and looking at Tori] Starting with the pretty girl...

Tori: I'm André's secret Santa, and I have like no clue what to give him.
Cat: Just get him a present!
Beck: [mutters] Oh My God.

Jade: Two words.
Beck: I bet they won't be helpful.
Jade: Your problem.
Beck: I was right.

André: How does a person go from an A to a D?
Jade: Happened to me in eighth grade.

Trina: How do you get it to flock?
Robbie: You just press that red button in the...
[Robbie is sprayed by flock from Trina]
Trina: Sorry!
Robbie: Can you please get me a flock rag?

Everyone but Cat: It's not Christmas without you!

Click here to see the photo gallery for A Christmas Tori. 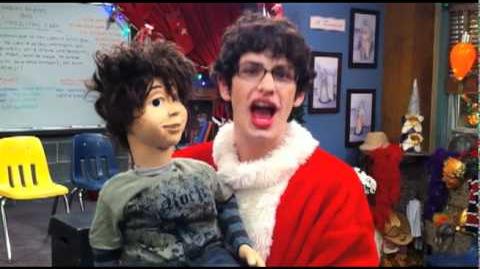 Victorious The Cast Just Being The Cast ) 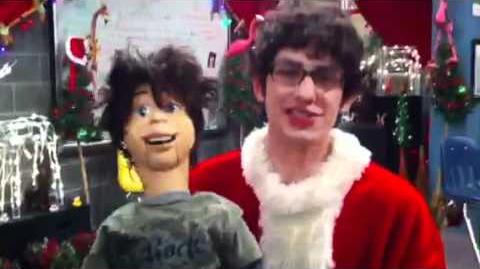 Victorious Things Getting Silly On Set 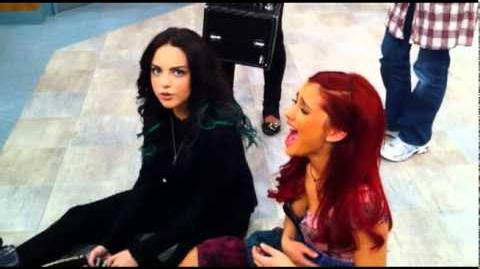 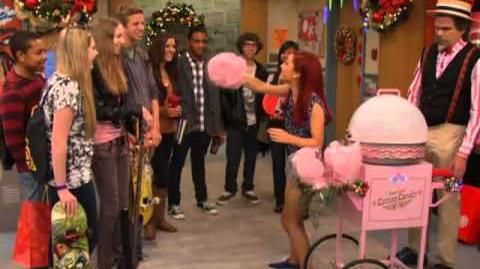 Victorious Behind the Scenes of 'A Christmas Tori'