Jade West is one of the main characters on Victorious. She sometimes serves as an antagonist to the title character, Tori Vega, but overall, she is still treated as a member of their gang of friends. She appears to be very goth, punk, and very rebellious in her attitude and the way she dresses. She often possessive of her boyfriend, Beck Oliver, and tended to get jealous easily, as seen even when she and Beck were broken up. She is portrayed by Elizabeth Gillies... Read more 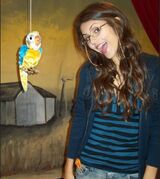 Bade is the pairing of Beck Oliver and Jade West (B/eck and J/ade). They started dating before the start of the pilot episode and were a couple through most of the show. Despite fighting a lot and breaking up a couple of times in Jade Dumps Beck and The Worst Couple, they show a love for each other. Beck mentioned that he wants a girl who fights back, and Jade appears to be calmer in Beck's presence... Read more